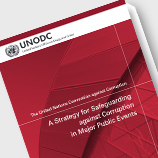 27 November 2013 - Across the world, major public events attract huge audiences and cost billions of dollars. Given the large amounts of money involved, both in their organization and in potential earnings, the likelihood that regulations and procedures might be set aside or ignored increases dramatically. But any failure to protect such events from corruption can have enormous political, financial and economic consequences for agencies, sponsors and countries.

During a special event at the Fifth Session of the Conference of States Parties to the UN Convention against Corruption in Panama City - COSP5, speakers from UNODC, the Organization for Economic Co-operation and Development (OECD), the Russian G20 Presidency and other organizations underlined the importance of safeguarding these events against corruption.

In his keynote speech at the event, UNODC Executive Director Yury Fedotov said: "What is needed is targeted action to help organizers identify, assess and manage the risks, consistent with established legal norms and regulations and drawing on good practices."

Integrity challenges in the organization of major events are manifold. They can range from the hiring and management of large staff, which can open vulnerability to bribery and corruption, to the challenges of large-scale procurement and contracting, which can test the limits and efficiency of existing procurement systems and practices.

Policies and practices that are relevant include, among others, the adoption of special legislation to support the event; the creation of specialized agencies responsible for anti-corruption oversight; and the need to monitor closely the flow of funds, particularly where new constructions, infrastructure development or security operations are concerned.

Successful examples include the June 2010 G8 and G20 Summits, where Canada established the Summits Management Office to manage the organization, infrastructure, and logistics of all events.  In 2008, at the Beijing Olympic games an accountability system was set up a tracking system created and individuals in management were expected to play a leadership role in demonstrating integrity.