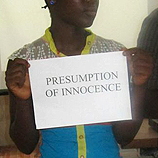 13 December 2013 - As part of a fellowship programme for law students who want to become public defenders, UNODC partnered with the Washington and Lee University School of Law in the United States and the Public Defense Office in Monrovia, Liberia. The programme aims to strengthen the national criminal justice system by introducing well-prepared lawyers into the profession.

Emerging from a prolonged civil war, Liberia has made considerable efforts to rebuild its public institutions. Among these, building the capacity of the criminal justice system has been of particular concern, given that a large percentage of prisoners await trial within Liberia's prisons.

In recent years, efforts to strengthen the criminal justice system in the country have concentrated on rebuilding the capacity of the prosecution and the judiciary, and less attention has been given to increasing the capacity of defence lawyers. An assessment conducted in 2010 by UNODC found that there were only 21 public defenders in the entire country, most of them young and inexperienced.

Since Liberia uses an adversarial criminal system - where a case is submitted to a jury by a prosecutor against a defence - a robust and effective defence is essential to ensure due procedure. Building effective defence attorneys will assist the Liberian justice system in avoiding mistakes, such as lengthy detentions without trial, or wrongful convictions and overly harsh sentences. A well-trained criminal defence, moreover, is not only critical to ensure due process, but also key in building the trust of the public in the country's justice system.

The fellowship programme, which is part of UNODC's project Promoting the Rule of Law and Governance in the Criminal Justice System in Liberia, has already trained sixteen Liberian law students, who also gained hands-on experience with an internship at the Public Defense Office. During their training, fellows accompany public defenders to court, assist in case preparation and learn how to produce petitions and motions. Through these practical experiences, students build their confidence in working with other criminal justice actors, which helps them to prepare for a successful start as a public defender. At the same time, they provide support to the public defenders in their daily work, allowing these to fulfill their functions more effectively.

The fellows also extend their knowledge to the community. As part of the training, they are required to teach workshops on access to justice, providing the community with information on how to access public defenders, raising awareness of their human rights and how to protect them, and how to advocate on behalf of suspects, the accused, victims and witnesses.

An interview with one of the fellows from the programme:

An interview with the first, and only, female public defender in Liberia explaining the importance of her work: