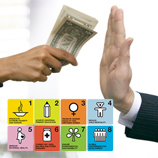 26 September 2013 - Now is the time to make good governance and anti-corruption an integral element of our global commitment to development said Yury Fedotov, Executive Director of the United Nations Office on Drugs and Crime (UNODC) on the margins of the 68th session of the UN General Assembly.

"There has been a growing realization that corruption and lack of good governance pose a major threat to social and economic development, and that they have hindered progress in attaining the MDGs," said Mr. Fedotov.

The UNODC Chief was speaking at an event jointly organized by UNODC, the United Nations Development Programme (UNDP) and Transparency International titled, "Looking to 2015 and Beyond: The Role for Anti-Corruption and Governance."

Mr. Fedotov said a report released in July by the Secretary-General on advancing the UN development agenda beyond 2015 acknowledged the importance of "effective governance based on the rule of law and transparent institutions" as an outcome and enabler of development.

"As guardian to the Conventions against Corruption and Transnational Organized Crime, UNODC is well-placed to coordinate an approach to measuring the rule of law, justice and security as they relate to development with our UN partners and civil society," he said.

Sustainable development and its relationship to good governance and anti-corruption will be addressed at the Fifth Conference of State Parties to the UN Convention against Corruption to be held in Panama City, Panama, 25 - 29 November 2013. The biennial event brings together around 1,500 people from Member States, parliaments, inter-governmental organizations, civil society, the private sector and the media.

Executive Director's Remarks at the 68th UN General Assembly side event on "The role for anti-corruption and governance: looking to 2015 and beyond"

Video of Side Event "Looking to 2015 and Beyond: The Role for Anti-corruption and Governance", 25 September 2013, New York