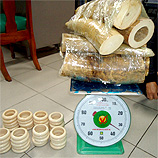 Speaking on the margins of the UN General Assembly at an event organized by the President of Gabon, Ali Bongo Ondimba, and German Foreign Minister Guido Westerwelle, Mr. Fedotov warned that poaching and wildlife trafficking were transnational organized crime being carried out on a "massive scale".

"Poachers and other criminals are driving elephants, rhinos, tigers and many other species to the verge of extinction, around the globe," he said. "These criminals are destroying local livelihoods, upsetting fragile ecosystems and hindering social and economic development. They are fuelling violence and corruption, and undermining the rule of law."

Mr. Fedotov called on states to treat poaching and wildlife trafficking as serious criminal offences. Legislation and criminal justice systems need to be strengthened, and more must be done to reduce the demand driving the illegal trade in wildlife, he added.

"We need to raise awareness of the devastation caused by the markets for ivory, rhino horn, bushmeat, exotic parrots and shark fins. We must make consumers aware that this crime is far from victimless," said Mr. Fedotov.

Wildlife crime ranks among trafficking in drugs, arms and humans (The Guardian)