23 July 2014 - UNODC offices around the world organize events each year on 26 June with local communities and governments to celebrate the World Drug Day. People from all regions - Africa, Asia, Europe and the Americas - got together this year to spread a message of hope: drug disorders are preventable and treatable. Below is a selection with some of the many events that took place this year. 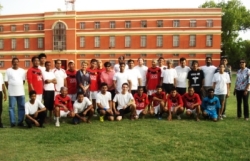 In New Delhi, UNODC hosted a panel discussion with parliamentarians from the country's major political parties. At the event, UNODC presented the Integrated Drug Information System (IDIS), a web-based application which collects and analyzes information on drug use patterns, and can assist law enforcement authorities in identifying trends in seizures and help service providers in preparing adequate responses. The World Drug Day commemoration came to a close the following day with a UNODC organized football match between Dayspring, a community of people affected by drug use, and a joint UN team. The nail-biting match saw a very strong performance by both sides with the game ending in a draw.

Nigeria: faith and community assist in reducing drug use 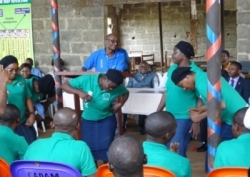 UNODC, the Nigerian Government and a faith-based organization came together during this year's World Drug Day in an event that featured singing, dancing and drama plays by people using the services of the Christ Against Drug Abuse Ministry (CADAM), as well as presenting personal testimonies by former drug users. Through the European Union funded project known as "Response to Drugs and Related Organized Crime in Nigeria," UNODC is supporting the local Government in its effort to fight illicit drug production, trafficking and use, and to curb related organized crime. The project supports the treatment and rehabilitation of drug users, while reducing drug use in Nigeria. 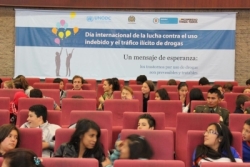 UNODC, together with the Colombian Government, held an event specially for children, with the aim of strengthening cooperation between authorities and civil society against drug use by young people. About 400 attendees watched a video made by students of a local school which showed their own points of view on drug production and use. Additionally, public announcements on drug use prevention, featuring popular Colombian football player and UNODC Goodwill Ambassador Radamel Falcao, were shown. To conclude the event, the young audience enjoyed "Red Alert", a play featuring renowned Colombian comedy actors, which invites the audience to reflect on the effects of illegal drugs. 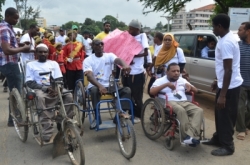 In Malindi, Kenya, a coastal town burdened by high drug use, 150 people - including school children, representatives of the national drug control agency, and stakeholders concerned with reducing both drug demand and supply - participated in a parade filled with cultural activities. In recognition of the work carried out by the Omari Project, a UNODC-supported community organization, the procession began at the organization's facility, where hundreds of onlookers were entertained by dances and poems in local languages, performed by students, artists, dance groups and other members of the community.

Viet Nam: art as a tool for awareness 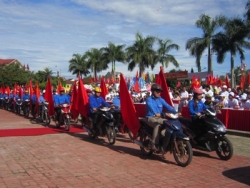 A contest for drug themed drama scripts aimed at raising public awareness about drug use and their impact on local society was organized on 24 June by the Government of Viet Nam in partnership with civil society. With over 170 submissions, the winning script was then performed at the award ceremony. The next day, a parade organized by a local drug prevention civil society organization, which focused on promoting drug control policies, was held with participants from 12 Vietnamese provinces. Additionally, calls were made for ending stigma and discrimination against drug users, while colorful banners bearing the UNODC World Drug Day 2014 slogan, "A message of hope: drug use disorders are preventable and treatable", were prominently displayed throughout.

United Arab Emirates: leveraging the support of loved ones 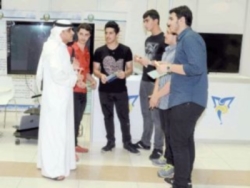 In the United Arab Emirates, community organizations, jointly with the Ministry of Interior and other concerned stakeholders, including the National Rehabilitation Centre, organized outreach and awareness raising activities in public places across the country, for instance in shopping malls, to inform people about the harm associated with drug dependence, and publicize the services available for treatment and rehabilitation. This year's campaign was focused on youth and the key role of family support in drug use prevention. 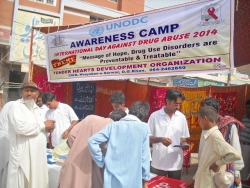 World Drug Day 2014 was marked across all provinces in Pakistan in both community and prison settings, drawing particular focus to a local UNODC project for prevention, treatment and care for women who inject drugs and female prisoners. An "Awareness Camp" was organized at a busy traffic intersection in the city of D. G Khan to spread the message about the harm done by drugs. Also, using this year's theme, "A message of Hope: Drug use disorders are preventable and treatable", the event raised awareness on drug use and HIV. More than 1500 people received information at the camp, where provincial health staff and community leaders also participated.

Related events were also organized by civil society organizations throughout the world. As an example, the REACT campaign from Dianova, a Portuguese organization, was launched during the commemoration of World Drug Day 2014 and included messages, posters, brochures and videos released for broadcast, print and online media. The campaign draws attention to the effects and consequences of drug abuse in a country that has seen an increase in the prevalence of lifelong drug use from 7.8% to 12% as of 2012. Two video spots were created showing the dangers drugs pose to the personal, family and work lives of drug users, and highlight how treatments can assist them in overcoming drug dependence.