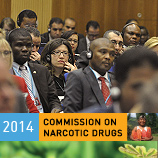 21 March 2014 - After seven days of discussion and debate on drug policy, the 57th Session of the Commission on Narcotic Drugs (CND) closed today with Member States adopting 11 resolutions.

Addressing the assembled Member States in his closing speech, the Executive Director of the UN Office on Drugs and Crime (UNODC), Yury Fedotov, said that, over the past seven days, the world had gathered in Vienna to discuss the key challenges in drug policy.

He added, "The CND has also enabled us to strengthen our responses to such threats as drugs from Afghanistan and drug trafficking and consumption in West Africa."

The 57th session of the CND began on 13 March with the High-Level Review and agreement on a Joint Ministerial Statement on the world drug problem. Following the weekend, on 17 March, it reconvened for the regular session of CND, which ended today. Over the last seven working days, as many as 1,300 participants from 127 UN Member States, intergovernmental organizations, UN bodies, civil society, and media attended the opening, plenary sessions, and numerous side-events.