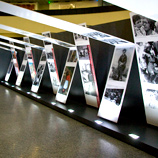 08 April 2015 - An exhibition at the Vienna International Centre on the suffering of conflict refugees fleeing to Turkey offered an opportunity for UNODC to showcase its own ongoing activities against migrant smuggling.

In his remarks at the opening ceremony, UNODC Deputy Executive Director Aldo Lale-Demoz said: "We cannot stand idle as desperate people fall prey to international organized crime while trying to escape conflict and humanitarian disasters. We need urgent and resolute international action to save lives, assist victims, as well as to investigate, prosecute and sentence the perpetrators of criminal activities."

Refugees and migrants offer cash for their trip and are lured by smugglers into perilous journeys that increase their trauma and desperation. Many of them die in the attempt to gain a better life. Irregular migrants are also particularly vulnerable to other organized crimes such as kidnapping, extortion, forced labour, sexual exploitation and physical assault.

Later in his speech, Mr. Lale-Demoz stressed that the implementation of the Migrant Smuggling Protocol by States was crucial for cross-border cooperation, among countries of origin, transit and destination. He said that an effective response required capacity building among front line officers, investigators and magistrates so they could carry out their duties effectively. Just as importantly, noted the Deputy Executive Director, was the need for States and civil society to concentrate resources on protecting migrant smuggling victims.

"As guardian of the United Nations Convention against Transnational Organized Crime and the Protocol against Smuggling of Migrants, UNODC provides technical assistance and supports the international community in developing comprehensive strategies that encompass prevention, prosecution and protection," said Mr. Lale-Demoz in concluding his remarks.

Due to its geographic location on the so-called Eastern Mediterranean migration route, Turkey has a crucial role in responding to the needs of refugees and vulnerable migrants. The Turkish Government also works in close cooperation with UNODC and neighbouring States to ensure that the country's response to irregular migration and transnational organized crime is framed by fundamental human rights.

Turkey is currently the chair of the Global Forum on Migration and Development, and has a close association with UNODC in South Eastern Europe on this issue as well as tackling other forms of organized crime, including money laundering. Based on figures from the UN High Commission for Refugees the number of people seeking refuge and claiming asylum in the country has risen to almost 1.9 million of which around 1.7 million are from Syria.

Global Forum on Migration and Development