Science in a suitcase: Testing for illicit drugs in Southeast Asia 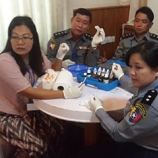 24 February 2015 - The production and movement of methamphetamines and heroin, coupled with the trafficking of precursor chemicals necessary to produce illicit drugs, present a major threat to the countries forming the Greater Mekong Sub-region. And while law enforcement officers dealing with these issues have traditionally lacked the correct resources to swiftly and systematically identify seized substances, this has started to change thanks to assistance provided under UNODC's Global SMART Programme.

As part of SMART - or the Synthetic Monitoring: Analyses, Reporting and Trends - UNODC works with police and customs agencies in the region to equip and train them on the use of field drug-testing kits so as to quickly identify illicit substances. The kits allow law enforcement personnel to conduct on-site testing for illicit drugs, including narcotics such as opium and heroin, as well as psychotropic substances like amphetamines. UNODC is also providing precursor testing kits that help detect the chemicals used in the manufacture of drugs.

At a recent training held for officials from Cambodia, Laos, Myanmar and Viet Nam, UNODC's Programme Coordinator for the Global SMART Programme in that region, Tun Nay Soe, addressed the need to provide front line officers with the skills and equipment, which will help contain the threats posed by drug and precursor trafficking: "When law enforcement officers encounter a suspicious looking substance, they should be able to identify it straight away. The user-friendly test kits will assist them with rapid and simple colour tests for the preliminary field identification of drugs and precursors most commonly encountered in the illicit traffic."

UNODC launched the Global SMART Programme in September 2008 to enhance the capacity of Member States and authorities in East and Southeast Asia to generate, manage, analyse and report synthetic drug and precursor information, and to apply this evidence-based knowledge to policy and programme design and implementation. Eleven countries in the region now receive related assistance from UNODC through the Global SMART Programme: Brunei, Cambodia, China, Indonesia, Laos, Malaysia, Myanmar, Philippines, Singapore, Thailand and Viet Nam.