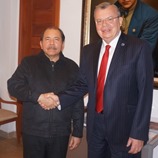 22 January 2015 - UNODC Executive Director, Yury Fedotov, in Nicaragua for the next leg of his mission to Central America, welcomed today the government's robust efforts in tackling drugs and crime, including social policies protecting the vulnerable, especially young people, from drug use and participation in crime.

According to Mr. Fedotov, "UNODC is ideally suited to assist the Nicaraguan Government in this work due to the organization's unique expertise in promoting regional cooperation to counter transnational organized crime, and its global experience in areas such as human trafficking, drug demand prevention and criminal prosecutions."

Speaking after a meeting with Nicaraguan President Jose Daniel Ortega Saavedra, Mr. Fedotov said, "In my wide-ranging and constructive discussion with President Ortega, I stressed that UNODC will continue to offer its wholehearted support for the Nicaraguan Government's fight against drugs, crime and violence."

Mr. Fedotov also told President Ortega he recognised Nicaragua's overall contribution to the regional response to these challenges, and congratulated him on the country's successful community policing scheme. He described the community policing methods as, "A fresh approach that is extremely promising and a potential influence on the way other law enforcement agencies operate elsewhere in Central America."

Mr. Fedotov was visiting Nicaragua as part of a wider mission to Central America that also took in Honduras and ends in Panama. The mission seeks to promote greater cooperation among countries in the region, while affirming UNODC's support for the Central American Security Strategy. It was also designed to ensure that UNODC's regional activities continue to fully support all Central American countries in the areas of drugs, crime, corruption, violence and anti-terrorism.