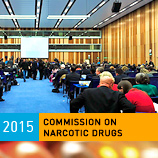 9 March 2015 - Addressing delegates at the start of the 58th Session of the Commission on Narcotic Drugs (CND) today, the Executive Director of the UN Office on Drugs and Crime (UNODC), Yury Fedotov, praised the CND's vital role as a policymaking body on narcotic drugs within the UN system.

Mr. Fedotov said that working with the Commission had enabled UNODC to "put in place integrated, inter-regional responses linking UNODC's country, regional and global programmes to confront the challenges of illicit drugs".

The Commission, he stressed, has helped the Vienna-based organization achieve greater strategic and operational coherence, as well as provide effective support to countries founded on the international drug control conventions, and human rights standards. The hard work of confronting illicit drug supply and demand, said Mr. Fedotov, went on every day and was the result of the Commission's and UNODC's collective efforts.

Mr. Fedotov was speaking at the opening of the Commission, which is being held between 9 and 17 March in Vienna. This year a special segment lasting four days will be held on preparations for the UN General Assembly Special Session on the world drug problem in 2016. Following this, between 13 and 17 March, the Commission's regular segment includes deliberations on draft resolutions and the scope of the control of substances.

This CND session brings together around 1,000 delegates representing Member States, inter-governmental organizations, civil society and the media for a global discussion on the world drug problem. This year, the Commission discusses 12 draft resolutions; 65 side events will also be held on the margins of the commission, as well as numerous exhibitions.

CND Draft Resolutions to be discussed