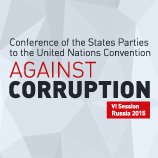 2 November 2015 - "The world counts on you to take bold decisions and act decisively to strengthen the global fight against corruption and bribery," UN Secretary-General Ban Ki-moon told the world's largest anti-corruption forum today in an opening message.

The Secretary-General's message was read out by UNODC Executive Director, Yury Fedotov, to the more than 1,000 participants at the opening of Sixth Session of the Conference of the States Parties to the UN Convention against Corruption gathered in St. Petersburg, Russia.

Acknowledging corruption's devastating impact, the Secretary-General said, "To achieve the new development agenda, we must end corruption and bribery." He later said, "Our ultimate goal must be to turn hands thrust out in hope of payment into hands joined together against this pernicious crime. Let us forcefully convey the message that when bribes are paid, everyone counts the cost."

The UNODC Chief, in his opening address, reinforced the Secretary-General's words when he said, "Corruption abets criminals in exploiting poverty and disadvantage, and enables organized crime to flourish at the expense of all our societies."

Mr. Fedotov stressed that there was need to "ensure that public resources go where they are supposed to go". He also underscored the Convention's strength as "a solid platform for engaging the private sector as a key partner in the fight against corruption and in global action to achieve sustainable development outcomes".

Before the conference opened, the UNODC Executive Director, read out a statement calling for conference participants to observe one minute's silence out of respect for those who died in Saturday's plane crash in the Sinai. The plane was travelling between Sharm el-Sheikh in Egypt and St. Petersburg when it went down.

Aside from Mr. Fedotov, speakers included the Chief of Staff of the Executive Office of the President of the Russian Federation, Sergey Ivanov, who delivered the statement of Russian President Vladimir Putin, and Russian Minister of Justice Alexander Konovalov, as well as a number of other ministers and high-level delegates from across the world.

More than 1,000 people from Member States, parliaments, inter-governmental organizations, civil society, the private sector and journalists from a broad range of national and international media are attending COSP6. More than 30 side events will be held on the margins of the conference on how to better tackle corruption.

Further information for the media