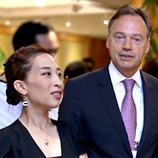 23 November 2015 - In preparation for next year's United Nations General Assembly Special Session on the World Drug Problem (UNGASS 2016), over 150 policy makers, experts, practitioners, members of international organizations, and civil society from 27 countries gathered this week to exchange ideas and lessons learned, and to consider alternative development in the context of the global development agenda. The second International Workshop and Conference on Alternative Development (ICAD2) is hosted by the Government of Thailand, in collaboration with the Government of Germany and UNODC.

Last week, participants visited alternative development project sites in Myanmar and Thailand, where rural communities previously grew opium poppy to meet their basic needs. Both Governments made a long term commitment to support these areas with alternative development interventions to gain viable, legal income alternatives and help them to improve their livelihoods. Community representatives from several generations of alternative development beneficiaries in Thailand shared their personal stories of the change they experienced over the years. The older generation recalled times of conflict and lawlessness, lack of opportunities, dependency on opium poppy cultivation, heavy drug use and engagement in other illicit activities. The younger generation described how decisions by their grandparents and parents contributed to the improved socio-economic situation they enjoy today.

Alternative development is a critical component of a comprehensive drug control strategy. It is a combination of development intervention and law enforcement that sustainably reduces illicit crop cultivation. When farmers engage in illicit crop cultivation or drug trafficking, they typically do so because of poverty and the need to meet basic needs. It is the absence of legal and sustainable income opportunities that forces them to engage in cultivation of illegal drugs.

Opening a high-level session and debate taking place at the Bangkok meeting, General Prayut Chan-o-cha, Prime Minister of Thailand, recognized development as essential to combat the world drug problem. For his part, UNODC Executive Director, Yury Fedotov, delivered a video message that reaffirmed "alternative development's immense potential and how it can dramatically improve the lives of people," stressing that alternative development is a working reality. UNODC Deputy Executive Director, Aldo Lale Demoz, highlighted that the recently announced Sustainable Development Goals (SDGs) are a perfect platform for alternative development to deliver results in poverty reduction, sustainable agriculture, environmental protection, the promotion of peaceful and inclusive communities, and good governance, also emphasizing that the "credibility and effectiveness of alternative development will be contingent on the implementation of SDGs addressing gender equality, reduction in inequalities, and partnerships for sustainable development".

Speaking at the meeting, Marlene Mortler, Germany's Federal Drug Commissioner, recommended that "our common goal should be to make alternative development not only a politically recognized, but also a properly funded and sustainably implemented pillar of international drug policy". HRH Princess Bajrakitiyabbha Mahidol stressed the need for sustained long-term commitment to alternative development - from the highest political levels, to the people in the community - and to integrate this approach into broader national development strategies in order to have real impact on the ground.

The conference provided an important platform to consolidate and design a way forward for alternative development for the consideration of United Nations Member States within the UNGASS 2016 process and will provide guidance in order to strengthen the international community's efforts to deliver long-term, inclusive, and sustainable interventions to combat the world drug problem.

Video Message of UNODC Executive Director at the meeting