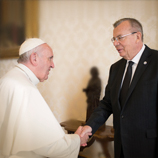 30 October - "It was a great pleasure to meet with Pope Francis on Thursday 29 October. I warmly congratulated him on his inspirational address at the UN General Assembly during the Summit for the adoption of the post-2015 development agenda in late September.

I informed Pope Francis that the UN Office on Drugs and Crime (UNODC) is fully committed to acting on his words, especially in achieving Goal 16 of the Sustainable Development Goals, which promotes the rule of law and equal access to justice.

The world is currently experiencing a number of security challenges, including smuggling of migrants, transnational organized crime, as well as terrorism and extremism. To be effective against them, I said, these issues require enhanced international partnerships that address the security, social and economic aspects.

Given the present situation, I discussed with Pope Francis the appalling tragedy of migrant smuggling that calls for a united and global response. I informed him that UNODC has developed a comprehensive strategic approach covering the Mediterranean, West Africa and the Balkans, which unites determined action against transnational organized crime to victim support.

UNODC also looks forward to enhancing its cooperation with the Holy See in support of the victims of human trafficking and smuggling of migrants.

The growing threat of radical extremism is driving deadly terrorism. I informed Pope Francis that UNODC is currently working on programmes targeted at young people to assist in this area and is ready to cooperate with the Catholic Church.

I told Pope Francis, at the end of our meeting, that UNODC views the Catholic Church as a close strategic partner in countering these ongoing threats and looks forward to furthering this partnership in the future."