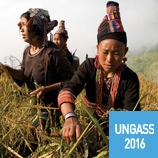 Speaking at the event, Aldo Lale-Demoz, UNODC Deputy Executive Director, highlighted the important role of Alternative Development within the context of the SDGs: "With an emphasis on poverty reduction, sustainable agriculture, environmental protection, peaceful and inclusive communities, and good governance, the SDGs offer a perfect platform for Alternative Development to deliver its intended results. Likewise, Alternative Development can help realize the SDGs on many levels, and ultimately improve the livelihoods and well-being of people affected by illicit cultivation of crops through addressing poverty and human insecurity."

As one of the fundamental pillars of the comprehensive drug control strategy, Alternative Development forms part of the broader development area. It aims to address the root causes of illicit crop cultivation - namely poverty and lack of development - and provide sustainable livelihood opportunities.

The high level discussion was co-hosted with the Kingdom of Thailand - the birthplace of Alternative Development and a role model in this area. "Selflessly, Thailand has been sharing its knowledge and optimism with countries across the world," said Mr. Lale-Demoz. "Thailand has led the way in providing evidence that you can transform conflict and poverty into social and economic opportunities and prosperity, in advocating that, with time, trust and support, entire communities can evolve and thrive."

Aside from the successes witnessed in Thailand, Alternative Development has improved the lives of tens of thousands of farm families worldwide. In Myanmar, for instance, the initial objective of food security is now being complemented with the production of commercially-viable cash crops, and the role of Alternative Development is recognized as a critical component of the national peace dialogue; in Peru, the farm enterprises sourcing several European chocolate factories with cacao were, not so long ago, illicit crop farmers who have organized themselves into successful business people with the support of the international community, leaving illicit markets, poverty and violence behind; and in Colombia, Alternative Development is currently an essential and integral part of an unprecedented peace process which the country has been working so hard to achieve over many years.

Yet in other countries, such as Afghanistan, Alternative Development still needs to become more prevalent. "Supporting Afghanistan has never been more important. The country's 19 per cent decline in opium poppy cultivation surface reported in 2015, and the related 48 per cent reduction in potential opium production - the best results in 6 years - can only be sustained if the international community actively helps Afghanistan in the implementation of much broader Alternative Development schemes and security," commented the Deputy Executive Director.

As a key issue within the drug debate, Alternative Development has featured prominently at the UNGASS through a number of side events and as a theme for one of the five thematic roundtables. This prominence re-confirms that Alternative Development is an effective international drug control strategy to not only reduce illicit crops but also improve the socio-economic situation of small farmer communities and support the 2030 Agenda.

It also builds on the UN Guiding Principles on Alternative Development, adopted by the General Assembly in 2013. Within the context of the SDGs, these Guiding Principles are crucial as they offer the flexibility for countries and communities to be able to adapt them to the prevailing socio-economic, cultural and legal circumstances, which is essential given that each country faces the challenges arising from illicit crops in a different manner.

UNODC and the SDGs