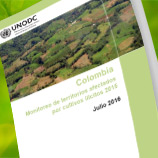 Additional data show that five of the 23 Colombian departments affected by coca crops - Cauca, Nariño, Putumayo, Caquetá and Norte de Santander - comprise 81 per cent of the coca crop area. This indicates that despite the substantial increase in the cultivated surface the affected communities would have remained the same.

This year the report also records that Caldas, Cundinamarca and La Guajira are the three departments free of coca, completing four full years without coca cultivation. Seven departments, moreover, have fewer than 100 ha of coca - Guainia, Vaupes, Arauca, Boyaca, Magdalena, Cesar and Santander - and are on their way to become free of coca crops.

Regarding the potential cocaine production for 2015, the estimate was of 646 metric tons, an increase of 46 per cent compared to 2014.

The survey also reports that coca crops remain a threat to the environmental and cultural diversity of Colombia. In indigenous reserves, coca crops increased by 52 per cent, rising from around 7,800 ha in 2014 to more than 11,800 in 2015. In the regions belonging to Afro-Colombian communities, the increase was of 51 per cent compared to the previous year, increasing from some 10,600 ha to more than 16,000.

As for national parks, 58 per cent of the area under coca cultivation is concentrated in Sierra de la Macarena and Nukak. The largest increases, however, were recorded in the Paramillo and Catatumbo-Bari parks, where the cultivated surface reached 772 ha and 412 ha, respectively.

The 2015 Colombia Coca Survey was simultaneously launched by the Colombia Drug Observatory, the SIMCI spatial imaging project and UNODC Colombia.