Building trust in law is an essential part of our work in Vienna, says UNODC Executive Director 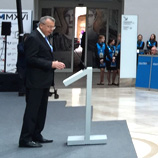 20 May 2016 - Attending the St. Petersburg International Legal Forum, opened by the Prime Minister of the Russian Federation, Dmitry Medvedev, UNODC Executive Director, Yury Fedotov delivered a keynote address on building trust in law to an audience of ministers of justice, chairs of constitutional courts, representatives of state bodies and law schools, partners in law firms, and heads of international organizations.

Noting that the UN family in Vienna addresses a broad range of issues from international trade law to the challenges of drugs and crime, the UNODC Chief said, "UN entities in Vienna are pursuing a common objective, namely the 2030 Agenda and its seventeen Sustainable Development Goals."

Commenting on UNODC, he said the organization was engaged in helping countries implement the international drug conventions and universal legal instruments against terrorism, as well as UN standards and norms in crime prevention and criminal justice.

International law was pivotal to this endeavour because it enabled global law and criminal justice cooperation, including mechanisms such as extradition, mutual legal assistance and confiscation of crime proceeds.

But it went further than this, he said: UNODC was promoting standards, guiding principles and best practices, as well as offering a strong platform for partnerships, including with the private sector and civil society.

Mr. Fedotov said that the international framework was constantly being tested by emerging challenges such as the nexus between organized crime and terrorism; potentially lethal new drugs outside international control, cybercrime, and migrants' vulnerability to traffickers and smugglers.

He finished by saying, "This high-level forum marked a new phase in strengthening international cooperation to address global challenges of corruption and illicit money flows. Through these agreed conventions and instruments, countries have the tools they need to cooperate to address common threats, and to act swiftly, flexibly and responsibly."

The St. Petersburg International Forum regularly attracts thousands of delegates from all over the world. Its primary purpose is to promote ideas that enhance legislation and encourage greater interaction among legal systems, as well as generate common solutions to legal problems.