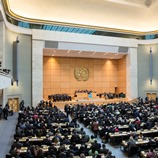 30 May 2016 - Globally, some 27 million people suffer from drug use disorders, with almost 200,000 losing their lives each year to overdose and other drug-related causes. Meanwhile, some 13 per cent of those who inject drugs are infected with HIV, compared with less than one per cent among the general population. Against this backdrop, these, and other challenges, were addressed in a statement issued to the Secretariat of the WHO's 69th World Health Assembly:

In 2009, the UN adopted the Political Declaration and Plan of Action on International Cooperation towards an Integrated and Balanced Strategy to Counter the World Drug Problem. This defined the action to be taken by Member States as well as goals to be achieved by 2019.

The challenges posed by the world drug problem continue and change at a pace that is straining on the capacities of many health authorities, as well as criminal justice systems.

The 2016 Special Session of the UN General Assembly (UNGASS) on Drugs, only the third in the history of the United Nations, therefore took place at a critical time, and offered the chance to assess progress and setbacks, and to find a way forward.

The message that has emerged from the many discussions held at UNGASS was that global drug policies must put people first.

Important scientific advances in recent decades have improved our understanding of drug dependence as a complex, multifactorial and chronic health condition. Drug use disorders are preventable and treatable diseases, and care must be provided, as with any other disease.

We remain fully engaged, in close collaboration with WHO, the scientific community and civil society organizations to 'put people first' and our joint efforts have already produced some notable evidence-based outputs:

UNODC will continue to work together with WHO and all relevant stakeholders to: ensure access to controlled drugs to relieve pain and suffering; promote prevention, treatment, rehabilitation and reintegration approaches rooted in evidence, science, public health and human rights; protect the health and welfare of mankind; and promote the safety and security of all our societies.

We will also continue to support the efforts of the Commission on Narcotic Drugs to do the same.  The outcome document recognized the role of the Commission as the "policymaking body of the United Nations with the prime responsibility for drug control matters" and called upon Member States to share with the Commission timely information on progress made in implementing the recommendations.

The challenges  posed by the world drug problem, will continue to evolve and emerge.

In order to meet them, we need a solid foundation - one built on agreed frameworks, including the three international drug control conventions, informed by evidence, and based on the principle of shared responsibility.

Our focus and priority must be the human dimension - the children, women and men affected by drug use and dependence, and all of the consequences for health and society, that illicit drugs can have.

UNGASS and its outcome document have reconfirmed a strong basis for joint action and international cooperation, and the recognition that the world drug problem "demands an integrated, multidisciplinary, mutually reinforcing, balanced, scientific evidence-based and comprehensive approach"

UNODC looks forward to continue working with WHO and Member States, to translate the UNGASS commitments and recommendations into action, thereby promoting a healthier and safer world.