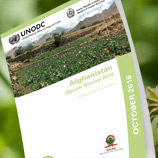 23 October 2016 - Opium production in Afghanistan rose by 43 per cent to 4,800 metric tons in 2016 compared with 2015 levels, according to the latest Afghanistan Opium Survey figures released today by the Afghan Ministry of Counter Narcotics and the UNODC. The area under opium poppy cultivation also increased to 201,000 hectares (ha) in 2016, a rise of 10 per cent compared with 183,000 ha in 2015.

In a statement timed to coincide with the survey's launch, UNODC Executive Director, Yury Fedotov, said that the new report shows a worrying reversal in efforts to combat the persistent problem of illicit drugs and their impact on development, health and security. Consequently, he urged the international community to lend their support to achieving the sustainable development goals in Afghanistan - including vital work on a peaceful and inclusive society, health, poverty, peace, and gender, among many others.

The higher production can be explained by the larger area under opium poppy cultivation, but the most important driver is the higher opium yield per hectare. The largest yield increase occurred in the Western region where the average yield grew by 37 per cent and the Southern region, with a 36 per cent rise. Since these two regions account for 84 per cent of the total opium poppy cultivation in Afghanistan, the yield increases in these regions had a strong impact on the national potential opium production.

As noted in the Survey, opium cultivation decreased in some of the main opium poppy-growing provinces, notably Farah and Nimroz (which saw declines of 57, and 40 per cent, respectively), but climbed in the provinces of Badghis (by 184 per cent) and Badakhshan (by 55 per cent).

The southern region has the country's largest share of national opium production with 54 per cent recorded, which equals some 2,591 metric tons (MT). Afghanistan's second most important opium producing region is the Western, responsible for 24 per cent of national production (1,139 MT), followed by the eastern region with 12 per cent (571 MT). The remaining areas (north-eastern, northern and central regions) together, accounted for only 10% of opium production.