Making the Sahel a priority: a UNODC comprehensive response to fight transnational crime and terrorism 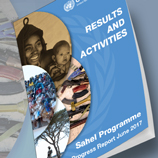 28 June 2017 - With the support of UNODC, the Sahel Programme Progress Report 2017 was officially launched in Vienna this month, showcasing the results achieved by the countries in the Sahel region regarding the fight against drug trafficking, transnational crime and terrorism.

Presented in attendance of Aldo Lale-Demoz, UNODC Deputy Executive Director; Marou Amadou, Minister for Justice of Niger; Lotfi Bouchaara, Permanent Representative of Morocco to the United Nations in Vienna; and Pierre Lapaque, UNODC Regional Representative for West and Central Africa, the report outlined that, spanning across Burkina Faso, Chad, Mali, Mauritania and Niger, and located in a semidesert area, the Sahel remains as one of the poorest regions in the world. Two-thirds of 70 million inhabitants of the Sahel are under the age of 25, and the region needs strong support for effective border control, accountable criminal justice systems, and strengthened law enforcement capacities.

"The nexus between terrorism and transnational crime has become blatant, and it is now mandatory to involve member States towards closer cooperation in order to address these challenges, where illicit financial transactions related to drug trafficking, and trafficking in persons are often used to support violent extremism and terrorism," said Mr. Lale-Demoz, following the report's presentation.

To make progress, the countries in the region established a Security Cooperation Platform and UNODC experts have provided specialized training to strengthen capacity to counter terrorism and transnational organized crime.

The main achievements of the platform include the creation of a Specialized Judicial Unit to strengthen the fight against terrorism and its financing in Burkina Faso, the dismantling of an international drug trafficking network in Mali, and the creation of a law to ensure better access to legal aid for citizens in Mauritania.

Following the adoption of an anti-corruption bill in December 2016, Niger has recovered more than $ 5 million in assets. This year, the Government signed a UN protocol that ensures the protection of children associated with armed and terrorist groups and agrees to refer such children to protection services.

"The support of UNODC, as we have seen, has been an important contribution to improving the criminal chain in dealing with terrorist offences cases," said Mr. Amadou.

The platform also reports on seizures of illicit drugs, passports and gold, as well as dollar bills through the training of Joint Airport Interdiction Task Force (JAITF) and the Airport Communication Programme (AIRCOP) officers.

The report adds that the Sahel Programme implementation will continue with a greater focus on the South-South cooperation and on priority areas, including pro-active investigation techniques to counter transnational crime in key border zones and foreign terrorist fighters, cybercrime and radicalization.

The Programme also works closely with Algeria, Libya and Morocco, as well as other UN entities in order to address the challenges affecting the region, and to strengthen countries' integration into activities and initiatives in the region.

The United Nations Integrated Strategy for the Sahel