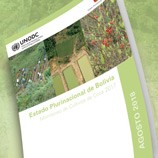 La Paz/Vienna, August 22, 2018 (United Nations) - In 2017, coca cultivation in Bolivia increased by six per cent compared to 2016, according to the latest Coca Cultivation Survey presented today in La Paz by the United Nations Office on Drugs and Crime (UNODC) and the government of Bolivia. In this period, the area under cultivation increased by 1,400 hectares (ha), from 23,100 ha in 2016 to 24,500 ha.

According to the Survey, the regions of Yungas of La Paz, the Tropic of Cochabamba and the North of La Paz represented 65, 34 and one per cent, respectively, of the areas under cultivation in the country.

The use of satellite images and field monitoring revealed an increase in coca bush cultivation in two of the three main producing regions: in the Yungas of La Paz cultivation increased from 15,700 to 15,900 ha, while an increase from 7,200 to 8,400 ha was also identified in the Tropic of Cochabamba. In the Northern region of La Paz, the cultivated area decreased from 240 to 220 ha.

The government of Bolivia reported an increase in rationalization and eradication activities, from 6,577 to 7,237 ha. Around 78 per cent of these activities were carried out in the Tropic of Cochabamba, 18 per cent in the Yungas and the North of La Paz and four per cent in the departments of Santa Cruz and Beni.

The potential production of coca leaf in the country was estimated at a maximum of 44,200 metric tons (mt) and a minimum of 35,500 mt. This calculation is based on studies carried out by the DEA (Drug Enforcement Administration) in 1993, by UNODC in 2005 and by CONALTID (National Council to Combat Illicit Drug Trafficking of the Plurinational State of Bolivia) in 2010.

The Survey also detected the presence of coca crops in six of the 22 nationally protected areas. In these areas, a total of 253 ha of coca crops were identified. The national park most affected by the cultivation of coca was Carrasco, followed by Cotapata, Isiboro Sécure and Amboró.

These figures reflect the main findings of the latest Coca Crop Monitoring Survey in Bolivia, carried out within the framework of UNODC's Programme to Support the Implementation of Bolivia's Action Plan on the Strategy of Anti-Narcotics and Reduction of Coca Crop Surplus, which is financed by the European Union and Denmark.

According to government data, the amount of coca leaf sold in the two authorized markets (Villa Fátima in the department of La Paz and Sacaba in the department of Cochabamba) was 22,967 mt in 2017. Around 91 per cent of coca leaves were commercialized in Villa Fátima, while the remaining nine per cent in Sacaba. The weighted average price of coca leaves in these authorized markets increased by 16 per cent, from US$ 8.1 per kilogram in 2016 to US$ 9.4 per kilogram in 2017.

In March 2017, Bolivia passed the General Law of Coca (Law 906). This increased the area where coca can be legally produced from 12,000 to 22,000 ha, differentiating the cultivation in Authorized and Unauthorized Zones.

The UNODC Representative in Bolivia, Thierry Rostan, also highlighted some recommendations to improve the control of coca crops:

- conclude the geographical delimitation of Authorized Zones for the production of coca leaves according to the General Law of Coca (Law 906) and its Regulations to prevent illicit cultivation;

- increase control measures to prevent the expansion of cultivation in Unauthorized Zones such as those around the borders of Ayopaya province of the department of Cochabamba and the provinces of Sud Yungas and Inquisivi in the department of La Paz; and

- strengthen the processes of rationalization and eradication, social control and impact mitigation, and to promote integral development in coca producing areas to curb surplus production of coca crops.

The Fact Sheet and Executive Summary in English is available here