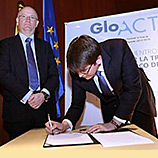 31 January 2018 - At a public event last week, the Government of Bogotá and UNODC signed a pact, reiterating commitment to the prevention of trafficking in persons and the smuggling of migrants.

The event was organized by the Office of the Mayor of Bogotá, in collaboration with UNODC Colombia and under the framework of the Global Action to Prevent and Address Trafficking in Persons and the Smuggling of Migrants (GLO.ACT).

In his opening remarks, Bo Mathiasen, UNODC Country Representative in Colombia, highlighted the importance of having strong relationships with local government partners in the successful fight against trafficking in persons and the smuggling of migrants.

Echoing that sentiment, Miguel Uribe, Government Secretary of Bogotá said: "Human trafficking is a crime that a single institution cannot tackle. We need all government institutions to cooperate in order to develop a coordinated effort." Also speaking, Rachel Brazier, Ambassador in Charge of the European Union Delegation to Colombia, explained the bloc's priorities, including victim identification and protection.

Margaret Akullo, Project Coordinator of GLO.ACT, introduced the initiative, noting that it has the benefit of a tripartite partnership between UNODC, the International Organization for Migration (IOM) and the United Nations Children's Fund (UNICEF). The project is being implemented across Africa, Asia, Eastern Europe and Latin America.

The event concluded with a panel discussion as participants spoke on the issue of prevention. Eurídice Márquez, UNODC Crime Prevention and Criminal Justice Officer, spoke about the difficulties of the identification of victims, saying: "We need to change the mindset of what a victim looks like and understand people's vulnerabilities." Similarly, Rocío Mojica representing UNICEF, emphasized the need to change the content of prevention campaigns. "Campaigns need to have clear messages, need to be articulated to fit the local context and images need to stop showing victims in chains," she underlined.

Global Action against Trafficking in Persons and Smuggling of Migrants - GLO.ACT