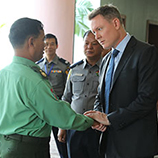 21 May 2018 - Senior drug policy leaders from the Mekong region -Cambodia, China, Lao, Myanmar, Thailand and Viet Nam- are in Nay Pyi Taw, Myanmar with the United Nations Office on Drugs and Crime (UNODC) this week for a conference of the Mekong MOU on Drug Control to discuss the illicit drug situation in the region, and to negotiate a new strategic plan. The conference brings together the leadership of Mekong drug authorities and over 100 senior delegates and experts to consider the latest data, and for detailed discussions on drug law enforcement, justice, health and alternative development strategies and programmes, while reviewing the implementation of the last Mekong strategy that the countries agreed.

"Illicit drug challenges are not only a national issue, and to ensure our recently announced drug policy succeeds we need to focus on the situation and implementation including with regional partners" said Myanmar Deputy Home Minister Major General Aung Soe. "This meeting is a step forward, allowing us to discuss issues and priorities with our neighbours and UNODC, including improving law enforcement cooperation and standards for community based drug treatment." He added, "A top priority for us (Myanmar) is a regional precursor strategy that will slow the supply of chemicals and pharmaceutical products into drug producing areas of the Golden Triangle."

The Mekong has long been associated with the production and trafficking of illicit drugs, particularly heroin, but has undergone significant transformation in recent years. Opium and heroin production have recently declined, while organized crime have intensified production and trafficking of both low grade yaba methamphetamine and high purity crystal methamphetamine to alarming levels - several Mekong countries have already surpassed 2017 seizure totals only a few months into 2018, and Golden Triangle methamphetamine is being seized in high volumes in Australia, Japan, New Zealand, Malaysia, Indonesia. The shift to synthetics like methamphetamine is particularly difficult for countries to address due to the complexity of responding to remote and clandestine production that can be moved, but also due to the health impacts on drug users.

"Methamphetamine and heroin are currently estimated to be worth US $40 billion in the regional drug market," remarked UNODC Advisor Tao Zhiqiang. "Effective coordination between countries is essential and the Mekong MOU remains the best vehicle available for this coordination." He added, "Law enforcement operations are part of the solution, but it is very important the countries consider how to address continuing growth in regional demand."

The Mekong MOU has provided a platform in recent years for the countries to agree to standard operating procedures for multi-country law enforcement operations, adapted and translated standards for community based drug treatment, and it has provided a framework for countries to exchange ideas and experience on a variety of issues and approaches. Importantly the Mekong MOU was aligned last year with the recommendations of the UN General Assembly Special Session on the World Drug Problem or UNGASS, ensuring a strong emphasis on reducing market demand and minimizing health impacts, consideration for alternative development programmes for drug producing communities, and a law enforcement focus on transnational organized crime groups that run the illicit drug business.

"Significant changes have been underway in the regional drug market for a number of years now," explained UNODC Regional Representative Jeremy Douglas. "Responding to the situation requires acknowledging some difficult realities, and agreeing to new approaches at a strategic regional level. Here in Myanmar it means focusing on peace and security in the Golden Triangle and places where conflict and the drug economy are connected. Ensuring governance and the rule of law will be crucial to any long-term reduction in drug production and trafficking." He remarked further, "To be candid, it also means addressing the corruption, conditions and vulnerabilities that allow organized crime to keep expanding operations and exploiting the region."

The Mekong MOU conference is followed by a visit of delegation leaders to Shan State where they will meet communities engaged in opium production and discuss opportunities to scale-up support programmes.