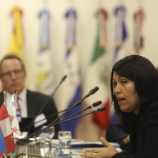 Buenos Aires, September 2018 - Trafficking in persons and smuggling of migrants are global concerns, with the former affecting virtually every country in the world as a place of origin, transit or destination. Supporting regional coordination efforts in the fight against these crimes is therefore critical, and a UNODC priority.

As part of these efforts, the UNODC Offices in Brazil and Colombia in cooperation with the Ibero-American Association of Public Ministries (AIAMP), organized the fourth meeting of the Ibero-American network of specialized prosecutors on trafficking in persons and smuggling of migrants (REDTRAM). The event was held from 26 to 28 September 2018 in Buenos Aires, Argentina, and resulted in concrete outcomes that aim to increase regional cooperation.

The network decided to develop joint investigation teams for specific cases of human trafficking and migrant smuggling in the region. It also agreed to set up a technical secretariat for REDTRAM located in the Public Ministry of Argentina, to promote communication and process requests for cooperation of its members.

The prosecutors furthermore resolved to increase the visibility and promotion of the network within the public ministries of their respective countries, and a logo and acronym for the network (REDTRAM) were approved.

Marcelo Colombo, Head of the Procuraduria contra la Trata y la Explotación PROTEX in Argentina said "the network was created to be a vehicle for horizontal informal cooperation for active exchanges between prosecutors against trafficking and smuggling in the region."

Astrid Muñoz, the prosecutor assigned by Colombia to the network, noted that "this is a unique space that has already allowed us to exchange information on concrete cases and helped us advance operational results in each of our countries."

The Global Action to Prevent and Address Trafficking in Persons and the Smuggling of Migrants (GLO.ACT) is a four-year (2015-2019), €11 million joint initiative by the European Union and UNODC. The project is being implemented in partnership with the International Organization for Migration (IOM) and the United Nations Children's Fund (UNICEF). GLO.ACT aims to provide assistance to governmental authorities and civil society organizations across 13 strategically selected countries: Belarus, Brazil, Colombia, Egypt, Kyrgyz Republic, Lao PDR, Mali, Morocco, Nepal, Niger, Pakistan, South Africa, Ukraine. GLO.ACT works with the 13 countries to plan and implement strategic national counter-trafficking and counter smuggling efforts through a prevention, protection, prosecution, and partnerships approach.

Global Action to Prevent and Address Trafficking in Persons and the Smuggling of Migrants (GLO.ACT)