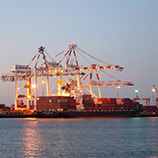 21 September 2018 - Forty-four countries and 52 seaports participated in a two-week maritime enforcement operation in the second quarter of 2018, aimed at disrupting the flow of possible container shipments contaminated with drugs.

The intercontinental operation led to 14 seizures and the confiscation of a total of 5,814 kilograms of cocaine. It also resulted in improved risk profiling and enforcement techniques, and increased awareness of this crime.

The operation was held under the UNODC-World Customs Organization (WCO) Container Control Programme (CCP), which helps Governments minimize the risk of shipping containers being exploited for smuggling of drugs, weapons, and other illicit goods.

With more than 90 per cent of the world's cargo transported by sea, maintaining the security of the international trade supply chain through programs like CCP is critical.

Established in 2004, the CCP is currently operational in 50 countries and has initiated activities in another eight. The work of the Joint Port Control Units under the Programme have resulted in the seizure of over 240 tons of cocaine, 6 tons of heroin, 1,634 tons of drug precursors, 69 tons of cannabis products and 750 container loads of counterfeit goods.

In addition, 1,518 other cases of illicit trade were reported, ranging from weapons, dual use or strategic goods, hazardous waste, CITES species, millions of cigarettes, spirits, stolen cars and motorcycles, expired and substandard pharmaceuticals and detections of falsely declared goods to avoid payment of Customs duties.