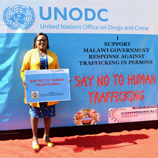 The rescue operation was coordinated by the Malawian Police Headquarters following an alert from the Anti-Human Trafficking Bureau (AHTB) of the Nepali Police - who in turn had been contacted by the presumed victims' families - that six Nepali nationals were being kept against their will in Blantyre.

The presumed victims were locked in a house in Malawi and their passports were taken away. According to their statements, they had been recruited through an agent a year before and traveled for months from Nepal with the intention to reach the United States through Bolivia. Instead of this, they were brought to Malawi via a complex route through Vietnam, Madagascar, Jordan, Dubai, Azerbaijan and Ethiopia, where they stayed for 4 months.

The group was then brought to Malawi and informed they would have to work in the country instead of the United States. After the rescue, the police officers in Malawi coordinated their action with UNODC and social services to bring the presumed victims to safety in shelters before they were able to return home to Nepal.

Patricia Liabuba, a Senior Official in the Malawian Ministry of Homeland Security and Secretary for the Inter-Ministerial Coordination Committee against Trafficking in Persons, declared to be impressed by the response of the Police and how they had applied the anti-trafficking trainings given by UNODC. She added that the social workers who brought the presumed victims to the shelters had been appointed and trained as Protection Officers and worked together with the police in efficient coordination during and after the rescue operation.

UNODC has supported the Government of Malawi to develop Standard Operating Procedures (SOPs) and a National Referral Mechanism for the implementation of the Trafficking in Persons Act, launched on 30 July this year.

" These tools have been successfully put to a test" Ms. Liabuba noted, adding that law enforcement agencies and front-line professionals now have guidance on identifying potential trafficking victims, where to refer them for protection and assistance, and how to process information on suspected traffickers.

She stressed that UNODC's support allowed the Inter-Ministerial Coordination Committee against Trafficking in Persons and the Malawi Police Service to overcome the challenges they were facing in addressing victims' needs during anti-trafficking interventions. " This operation clearly demonstrated that all stakeholders have adopted a victim-centered approach in dealing with trafficking in persons cases" she concluded.

Maxwell Matewere, UNODC National Project Officer involved in the development of the SOPs, explained that this instrument provides crucial information on the protection and assistance of victims in full respect of their rights.

Deputy Director of the Criminal Investigation Department Isaac Schwarz Norman, Assistant Commissioner of Police, confirmed that the victims had been successfully repatriated to Nepal and that a Malawian suspect was arrested.

UNODC has been working closely with the government of Malawi in a variety of counter-trafficking activities under the project " Strengthening the implementation of a comprehensive response to trafficking in persons in Malawi", funded by the United Kingdom.

Implemented under the UNODC Global Programme against Trafficking in Persons, jointly with the UNODC Regional Office for Southern Africa, this project contributes to the implementation of the UN Sustainable Development Goals (SDGs) and in particular SDG 16 on Peace, Justice and Strong Institutions.