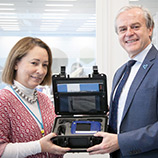 Vienna, 18 November 2019 - In the past few years, Mexico has seen a fast diversification in the assortment of drugs trafficked by organized criminal groups operating in Mexico, branching into the clandestine manufacture of methamphetamine and fentanyl and trafficking of synthetic opioids, fentanyl precursors and synthetic cannabinoids. From January to April 15 th of 2019, Government sources reported 16 cases of fentanyl detections, amounting to seizures of more than 42,000 tablets, 90 injectable ampoules and 26 kilograms of fentanyl.

Since 2008, 192 different new psychoactive drugs (NPS) were reported to the United Nations Office on Drugs and Crime (UNODC) by 14 countries and territories in Latin America and the Caribbean. These numbers reflect a persistent presence of a large number of NPS in the region. The need for law enforcement officers and forensic laboratories to use the latest technology to identify a wide array of drugs and substances has become more pressing than ever.

The devices were officially handed over to Alicia Buenrostro, Ambassador and Permanent Representative of Mexico by Jean-Luc Lemahieu, UNODC Director of the Division for Policy Analysis and Public Affairs on the premises of the UNODC Laboratory at the UN Headquarters in Vienna.

Ms. Buenrostro noted that since the beginning, the challenges and trends in drug production, trafficking and consumption have constantly been changing, forcing States and the international community to adapt the measures taken to face them. She said that the increase in the consumption of synthetic drugs, including in Mexico, that are increasingly deadlier and easier to manufacture and traffic, is undoubtedly the main related challenge that States have faced in history.

"Hence it is an honor for me to receive these handheld devices on behalf of Mexico, which will help strengthen our national capacities to detect drugs in a fast, safe and reliable manner," said the Ambassador, adding: "I convey the deepest appreciation of my country and my government to the United Nations Office on Drugs and Crime and to the donors, who have made this donation possible today".

In collaboration with of the Organization of American States (OAS), efforts are made to establish a regional early warning system at the OAS Inter-American Drug Abuse Control Commission (CICAD) to enable quick information sharing on emerging drugs and allow for targeted responses to protect the health of the population. Information gathered from national and regional early warning mechanisms is included in the UNODC Early Warning Advisory (EWA), and contributes to the quantitative and qualitative data for evidence-based decisions on national and international drug policies.

Additionally, the recently launched United Nations Toolkit on Synthetic Drugs is structured around the pillars of the UNODC Opioid Strategy and provides practical resources and guidance on response measures to the global opioid crisis and the threat of synthetic drugs.

The SMART programme in Latin America and the Caribbean is financially supported by the Government of Canada through the Anti-Crime Capacity Building Program (ACCBP) and the Government of the United States of America, through the U.S Department of State's Bureau of International Narcotics and Law Enforcement Affairs (INL).