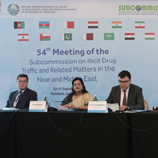 Tashkent (Uzbekistan), 24 September 2019 - Representatives from 35 countries and experts from over 20 international organizations met in Tashkent for the 54th Session of the Subcommission on Illicit Drug Traffic and Related Matters in the Near and Middle East, to strengthen cooperation in countering drug trafficking in these regions. The meeting, held from 23 to 27 September 2019, is co-organized by the United Nations Office on Drugs and Crime (UNODC).

Discussions on the first day highlighted that the world drug problem remains a common and shared responsibility that should be addressed in a multilateral setting through effective and increased international cooperation. It demands an integrated, multidisciplinary, mutually reinforcing, balanced, evidence-based and comprehensive approach. While tangible progress has been achieved in some fields, the world drug problem continues to present challenges to the health, safety and well-being of all humanity.

"We are convinced that this event is of great importance for further enhancing the effectiveness of our cooperation in combating the drug problem in the region and will give a new impetus to this extremely responsible work", noted Mr. Aziz Abdukhakimov, the Deputy Prime Minister of the Republic of Uzbekistan, in his opening remarks.

"Cooperation and coordination are essential to counter the problem of illicit drugs in the Near and Middle East region. This session provides a good opportunity for countries to analyse regional cooperation and coordination, particularly in view of record levels of opiate production originating in Afghanistan and related challenges," highlighted UNODC Executive Director Yury Fedotov in his address to participants.

This is the first time Uzbekistan is hosting a Subcommission session. During the five days, the Subcommission Member States will discuss the current situation with respect to regional and subregional cooperation in the area of illicit drug traffic and related matters. They will do so jointly with the National Information-Analytical Centre on Drug Control under the Cabinet of Ministers of the Republic of Uzbekistan, the main organizer assigned by the Government of Uzbekistan.

Moreover, the participants will review following four key topics in detail through working groups to discuss issues of regional importance and to facilitate informal discussions and open exchanges of views: The importance of exchange of actionable intelligence and role of regional cooperation platforms in facilitating this exchange; Trafficking in synthetic opioids and synthetic cannabinoids and measures to counter this trafficking; Record levels of the opiate production and related challenges; Practical measures tailored to the specific needs of children and youth to prevent and treat drug abuse among them.

In conclusion, the Subcommission will adopt the report on its fifty-fourth session, including the findings, conclusions and recommendations of the working groups. The Subcommission was established by resolution 6 (XXV) of the Commission on Narcotic Drugs and by ECOSOC resolution 1776 (LIV) in 1973.