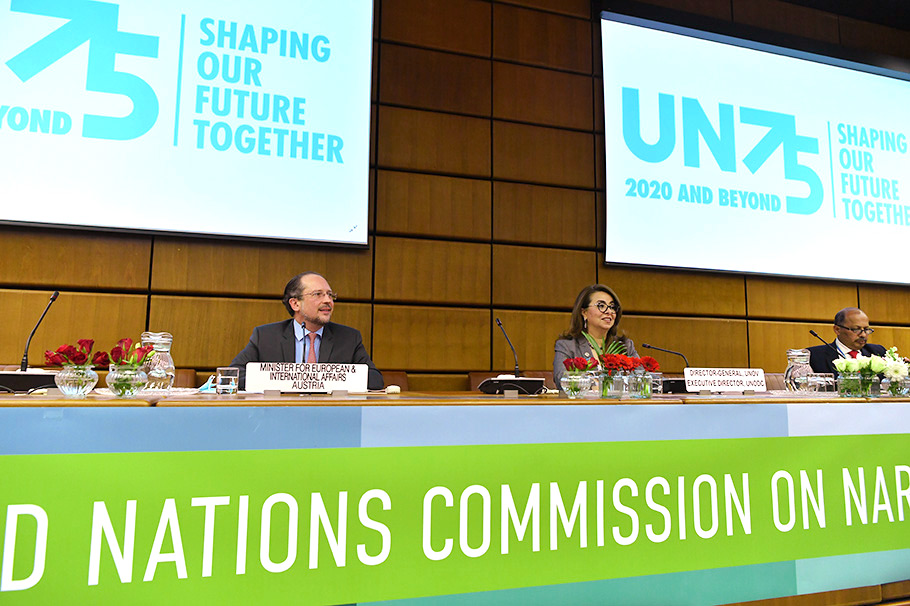 Vienna (Austria), 29 June 2020 - In December 1987 the General Assembly decided to observe 26 June as the International Day against Drug Abuse and Illicit Trafficking. Every year, the Vienna-based Commission on Narcotic Drugs (CND), as the United Nations body with prime-responsibility in drug-related matters, organizes a Special Event to commemorate this day and to raise awareness of the challenges illicit drugs represent to society.

The 2020 International Day against Drug Abuse and Illicit Trafficking was organized under the overall theme “Better Knowledge for Better Care” emphasizing the need to improve the understanding of the world drug problem and with better knowledge foster greater international cooperation for countering its negative impact on health, governance and security.

Commemoration of the signing of the UN Charter

This year, the 26 June also marked the 75th anniversary of the Charter of the United Nations. Signed in San Francisco on 26 June 1945, the Charter called for the UN to maintain international peace and security; promote social progress and better standards of life; strengthen international law; and promote human rights. To commemorate this important anniversary, the CND Special Event started with a commemorative event, with Executive Director, Ghada Waly, addressing the event in her capacity as Director-General of the United Nations Office at Vienna, and the Austrian Federal Minister for European and International Affairs, Alexander Schallenberg, speaking for the Host Country.

Following the commemorative opening, the event continued with the launch of the 2020 World Drug Report. Ambassador Mansoor Ahmad Khan, Chair of the Commission on Narcotic Drugs at its sixty-third session, stressed in his welcoming remarks, that reliable and objective data were a crucial tool in the international community’s joint efforts to effectively address the world drug problem.

“Illicit drug challenges have become increasingly complex, and the COVID-19 crisis and economic downturn threaten to worsen their impacts, for the people who can least afford it,” said the Executive Director of the United Nations Office on Drugs and Crime (UNODC), Ghada Waly. “We need to better understand the many dynamics fuelling and feeding drug use disorders, illicit drug cultivation and trafficking so we can improve responses, provide better care and save lives.”

The main findings of the 2020 World Drug Report were presented by Angela Me, Chief of the UNODC Research and Trend Analysis Branch, introducing the report consisting of six booklets. The report aims to support the international community in implementing operational recommendations on a number of drug policies issues, including the recommendations contained in the outcome document of the special session of the General Assembly on the world drug problem, held in 2016.

The presentation was followed by interventions from Member States, including the Permanent Representatives of Peru, Iran, Uruguay, Japan, Germany, Turkey, Colombia, Afghanistan, Cuba, Egypt, and representatives from the Dominican Republic, Venezuela, Mexico, Nigeria, United States of America, the Russian Federation, Honduras and Albania. In addition, the President of the International Narcotics Control Board, the Secretary General of the Shanghai Cooperation Organization, as well as a representative of the International Association for Hospice and Palliative Care, addressed the meeting.

Discussion on the impact of the COVID-19 pandemic on the world drug situation, co-sponsored by the European Union and the UNODC

The CND Special Event concluded with a dedicated discussion, co-sponsored by the European Union and UNODC, on the impact of COVID-19 on the world drug situation, from various regional perspectives.

In his welcoming remarks, Ambassador Mansoor Ahmad Khan, Chair, Commission on Narcotic Drugs, underscored that the COVID-19 crisis had a tremendous impact on the social, political and economic life across the globe, with the current health crisis increasing the vulnerability of people with substance use disorders. “What we need is a truly coordinated and joint multilateral response to address the devastating impact of the pandemic on all spheres of life,” he said.

Ghada Waly, Executive Director UNODC, and Floriana Sipala, Head of Organised Crime and Drugs Policy Unit of the European Commission, delivered opening remarks. The Chief of the UNODC Research and Trend Analysis Branch, Angela Me, made a presentation on the impact of the COVID-19 pandemic on the world drug situation, followed by a panel discussion on the regional impact of the pandemic, with interventions by Catherine de Bolle, Executive Director of Europol; Ambassador Adam Namm, Executive Secretary of the Inter-American Drug Abuse Control Commission, Organization of American States; Amira Elfadil, the Commissioner for Social Affairs of the African Union Commission; Niyom Termsrisuk, Secretary General of the Office of Narcotics Control Board (ONCB) of Thailand; and Jamie Bridge, Chair of the Vienna NGO Committee on Drugs (VNGOC).

The panel discussion was followed by interventions from the floor, including by the Permanent Representatives of Afghanistan and Egypt, and the representatives of the Russian Federation, Ecuador, Ireland, Poland, Albania and China. A statement was also made by the President of the International Narcotics Control Board. Alexis Goosdeel, the Director of the European Monitoring Centre for Drugs and Drug Addiction, and Ambassador Mansoor Ahmad Khan, Chair of the Commission on Narcotic Drugs at its sixty-third session, delivered closing remarks.