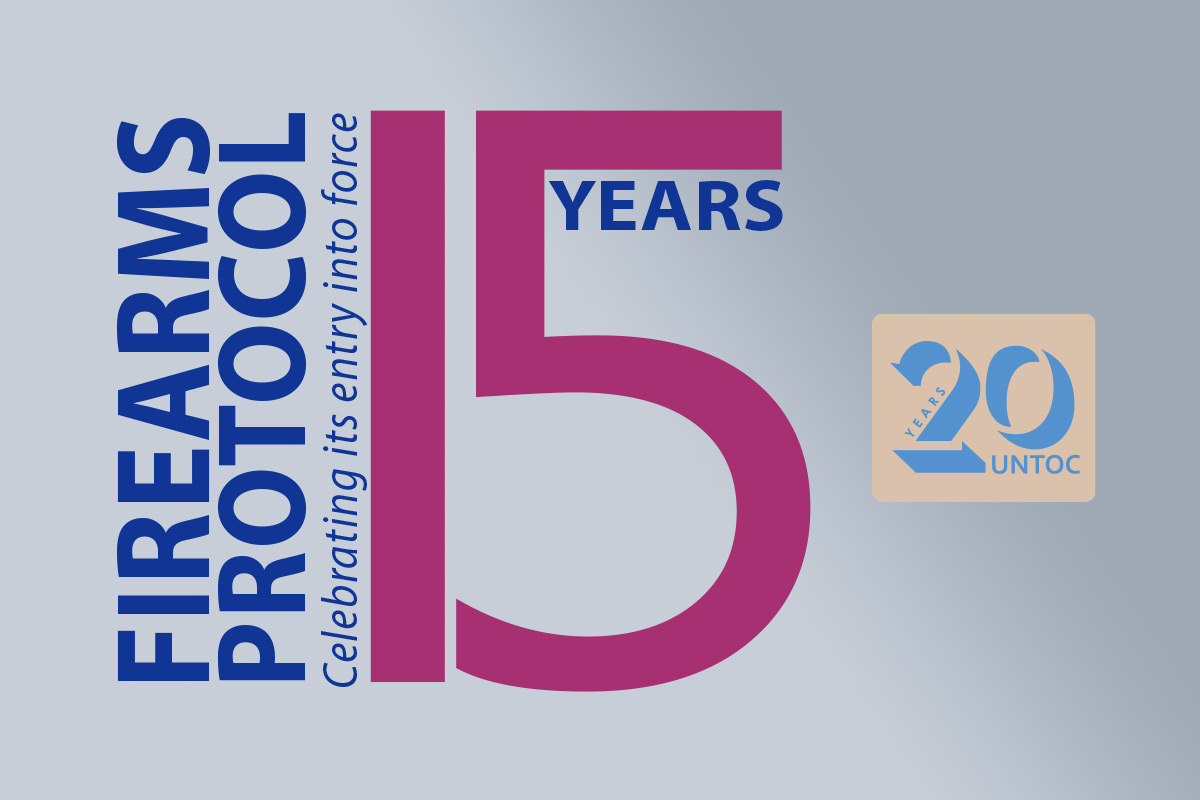 Vienna (Austria), 3 July 2020 – 15 years ago on 3 July 2005, the Protocol against the Illicit Manufacturing and Trafficking in Firearms, their Parts and Components and Ammunition (Firearms Protocol) entered into force. The date marks a milestone in the international efforts to prevent the proliferation of small arms as the Firearms Protocol was the first legally binding global instruments that addressed this bloodstained threat to peace, security and sustainable development.

This year, the anniversary almost coincides with the Working Group on Firearms, which will be held on 16 and 17 July, to discuss, for the first time by virtual means, the responsiveness of the Firearms Protocol to new and emerging threats, amongst other topics.

Celebrating the 15th anniversary, John Brandolino, Director of the Division for Treaty Affairs of the United Nations Office on Drugs and Crime (UNODC), is applauding the significance of the Firearms Protocol as “a crucial instrument to strengthen criminal justice responses to prevent and counter illicit manufacturing of and trafficking in firearms. Disrupting illicit arms flows is essential to effectively counter organized crime and terrorism and support the achievement of the Sustainable Development Goals.”

The Protocol requires States Parties to mark and register firearms in order to allow their identification and tracing, when recovered from a crime scene or detected in the hands of transnational operating trafficking networks. Most illicit firearms were once produced legally but entered the black market throughout their lifecycle. The unique marking on firearms can help identify firearms used by a criminals, organized crime or terrorist groups and trace them back to their point of diversion. This allows criminal justice systems to take action and bring perpetrators to justice.

The marking and record-keeping requirements of the Firearms Protocol are accompanied by a comprehensive authorization regime for arms transfers. By implementing this system, everyone involved in the import, export and transit of firearms and related items can be held accountable for the absence of correspondent authorizations and accompanying transfer documentation. If customs or law enforcement authorities detect firearms which are not complying with these provisions, the Protocol requires their confiscation, seizure and destruction. In order to enforce these preventive measures, it is the significant achievement of the Protocol to have established as criminal offences the illicit manufacturing of and trafficking in firearms, being the only legally binding global instrument to do so.

After the ground-breaking adoption of the Firearms Protocol by the General Assembly on 31 May 2001, more global instruments have followed. Only two months later the legally not binding Programme of Action was adopted, followed, in 2005, by the International Tracing Instrument (so called political instruments). In 2013, the Arms Trade Treaty further completed and enhanced the international framework on small arms control. The joint national implementation of these instruments complements and cross-fertilizes each other, through the establishment of comprehensive and harmonized firearms control regimes.

As we celebrate the 15th anniversary of the entry into force of the Firearms Protocol, with 118 States Parties today, we acknowledge its responsiveness to new and emerging forms of manufacturing and trafficking linked to organised crime and terrorism. John Brandolino: “In this decade of action, we seize the opportunity to invite countries, which have not yet done so, to become State Party, in order to achieve Sustainable Development Goal 16.4 by significantly reducing illicit arms flows until 2030.”

UNODC’s Global Firearms Programme is assisting governments to implement the Firearms Protocol through a holistic and integrated approach based on five main pillars. These pillars include: Legislative and policy development, preventive and security measures, criminal justice responses, international cooperation and information exchange, and the monitoring of illicit arms flows.