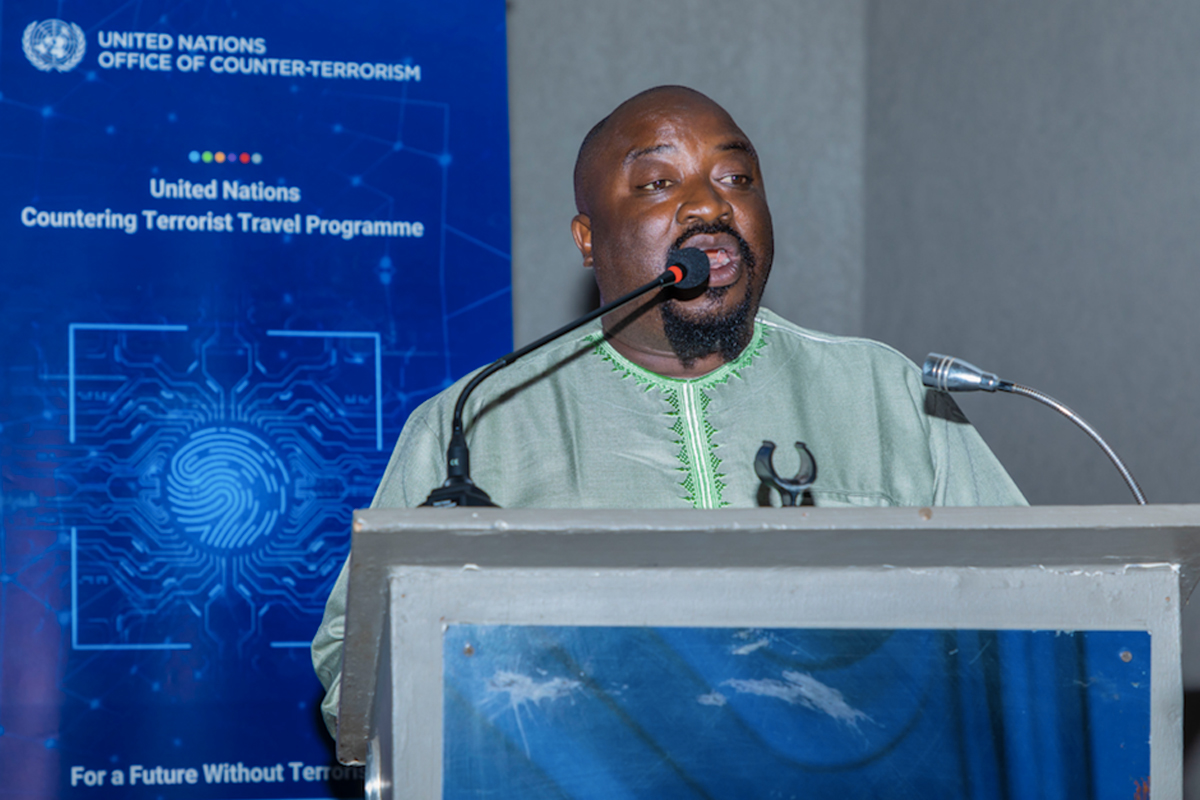 David Pandanoah, Minister of Internal Affairs of Sierra Leone, speaking during the opening session of the IWG. (© UNODC)

Freetown (Sierra Leone) 12 May 2022 - Whether it be tourists hungry for adventure, businesspeople eager to negotiate cross-national deals, or far-flung families looking to reunite, the appetite for global connectivity has grown exponentially since the advent of international air travel. Indeed, before the onset of the COVID-19 pandemic, the number of combined domestic and international travels reached a staggering peak of 4.5 billion in 2019.

Nevertheless, though this global connectivity offers us myriad benefits, it can also be exploited by terrorist entities and criminal groups looking to carry out their criminal activities across borders. Now, as global travel rebounds in the wake of the COVID-19 pandemic, these groups will also resume their use of air, land, and maritime borders across the globe.

West Africa is no exception. In countries like Mali, Niger, and Burkina Faso, terrorist armed groups have widened their presence. Identifying, detecting, and intercepting these terrorists – which include Foreign Terrorist Fighters – and other serious criminals is of paramount importance to ensure the safety of populations around the world. Collection and processing Advance Passenger Information (PAI) and Passenger Name Records (PNR) can help prevent their travel and prevent the spread of terrorism.

From 12-13 May, 70 representatives from border law enforcement, security and civil aviation agencies from 17 West African countries met this week in Freetown for the First Meeting of the West Africa Informal Working Group (IWG) in the framework of the Countering Terrorist Travel Programme.

“This meeting is an opportunity to raise awareness about the spread of terrorism through the movement of Foreign Terrorist Fighters,” said H.E. Mr. Jacob Jusu Saffa, Chief Minister of Sierra Leone, showcasing Member States’ willingness to engage with the UN system on the key issue of countering terrorist travel.

In 2019, the “All-of-UN” Countering Terrorist Travel Programme (CT Travel) was launched as a response to this growing threat. CT Travel is a global initiative to build Member States capacities, in line with related Security Council resolutions, to prevent, detect, investigate and prosecute terrorist offenses and other serious crimes, including their related travel, by collecting and analyzing passenger data, both API and PNR, including through Passenger Information Units (PIUs). PIUs are units providing systematic collection of API/PNR data of all passengers that allow authorities to identify high-risk passengers, while ensuring the highest level of consideration for human rights and fundamental freedoms.

AIRCOP, through its recognized specific operational experience and support to inter-agency unit working on air passenger data (the AIRCOP Joint Airport Interdiction Task Forces), oversees Pillar 2 of the CT Travel, which focuses on the institutional set up and operationalization of the PIUs. Effective PIUs, well-established within national security architectures, allow for an efficient collection of API/PNR data and will be given tools to properly analyse and use this wealth of information. Trainings on data protection, confidentiality and human rights play a key role is the development of this capacity.

Within the framework of the CT Travel Programme, the West Africa IWG was launched to foster the sharing of best practices, lessons learned and enable the widest possible cooperation and exchange of information between the PIUs of the region. West Africa has the highest concentration of beneficiary member states of CT Travel and AIRCOP is implemented in 15 airports of the region.

The event allowed participants to gain a better understanding of the efforts being made by Member States in the region, thanks to a regional situational analysis of API and PNR systems shared by the International Air Transport Association (IATA). International databases, API and PNR collection in various cross-border transportation modalities, legal frameworks, and real-time communication channels were key points of discussion.

“It is by analyzing all travel modalities at the national and international levels and by adopting a common approach among all countries in the region that we will be more proactive in our fight” noted Dr Amado Philip de Andrés, UNODC Regional Director for West and Central Africa at the meeting. “Passenger Name Record data processing will be a major undertaking for your countries in the coming years and will require the implementation of efficient infrastructures”.

Countering terrorist travel is key to counter the spread of the terrorism threat, but also to ensure the smooth operations of commercial airports, which are key components of Member States’ economic development, allowing for exchanges, travel and trade. Informal Working Groups for other regions where the CT Travel is active will be developed in the coming months.

AIRCOP is implemented by UNODC in partnership with INTERPOL and the World Customs Organization, aims at strengthening the capacities of international airports to target and intercept high-risk passengers, cargo and mail, as a contribution to the fight against illicit drugs and other illicit commodities (such as wildlife products or falsified medical products), terrorism-related threats (such as arms or potential foreign terrorist fighters), trafficking in persons and smuggling of migrants. It also aims at facilitating communication and coordination between origin, transit and destination countries to disrupt cross-border illicit flows and criminal networks. AIRCOP is active in more than 40 countries in Africa, Latin America and the Caribbean, the Middle East, South-Eastern Europe and South-East Asia.