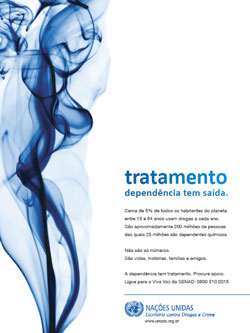 17 March 2008 - A publication aimed at helping family members and friends of individuals who struggle with dependence, "Anônimos" ("Anonymous"), was launched this week in Brazil with UNODC support. "Everybody knows someone in their family - or has a friend - who struggles with this problem," says magazine coordinator Romina Cerchiaro. "Our target are the people - their lives and social bonds".

Codependency is one of the magazine's highlights. Originally described as a situation faced by wives of alcohol dependents, the term is now used by specialists to describe how relatives and friends are affected by the dependents´ behaviour, and how this can hamper the treatment process. Various NGOs and support groups in Brazil are offering care within the family context in order to help treat the users´ chemical dependency.

"If I hadn't experienced this in my family, I would never have thought of creating a specialized magazine targeting dependents´ friends and families. We have lived through codependency and know how many people seek specialized information about treatment," says Cerchiaro.

Codependency has been more closely observed in Brazil over the past 15 years. Cerchiaro adds: "Little is portrayed in the media on how much it harms society. Estimates show that each dependent is emotionally related to at least two people. Yet this illness does not receive proper attention. Families, communities and the society as a whole suffer."

The magazine also looks at the 12-step programme from Alcoholics Anonymous. The first step involves admitting a dependency problem; the last step, to pass the message to others. "This magazine was my way of following this last step. I knew it would help people know more about the subject and be informed on new techniques. More importantly, it is a means of recounting success stories and giving a sense of hope."

The first issue has revealed a demand for information on dependency. "The 12th step is carried out vigorously by many people who have overcome the problem. A couple of days after the launch we started receiving dozens of e-mails by readers who wanted to tell their story. People go through very similar experiences."

"Anônimos" published an ad from UNODC on the magazine´s back cover (see above) :

There is a way out of dependence. Treatment.

All around the world, 5% of the population between 15 and 64 years uses drugs every year - approximately 200 million people of which 25 million are drug dependents.

These are not numbers.

These are lives, stories, families and friends.