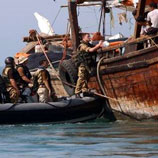 14 May 2009 - Today, the Executive Director of UNODC, Antonio Maria Costa, testified to the United States House of Representatives Foreign Affairs Subcommittee on International Organizations, Human Rights and Oversight on the issue of piracy.

He pointed out that there have been 80 reported attacks off the Horn of Africa this year, and that this poses a threat to Somalia's Transnational Federal Government, the stability of the region, and the commercial and security interests of UN Member States.

He called for greater preventive measures, strengthening of maritime security in the region, and increased efforts to track and recover the ransom money. He outlined a number of options for bringing piracy suspects to justice - an issue that has created some confusion among countries with warships in the region.

Mr. Costa noted that more than 60 piracy suspects are awaiting trial in Kenyan jails and more than two dozen in the Seychelles. Therefore, UNODC, in cooperation with the European Commission, is undertaking a joint programme to support the trial and related treatment of piracy suspects by boosting criminal justice capacity among Somalia's neighbors.