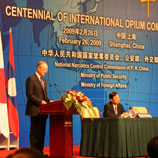 27 February 2009 - Centennial celebrations were held in Shanghai this week to mark the 100 th anniversary of the International Opium Commission which met in Shanghai, China in February 1909. The Opium Commission meeting was the first international conference to control drugs, and led to the conclusion of the first international convention on drug control, the Hague International Opium Convention of 1912. The commemorative event was attended by representatives of the thirteen nations that took part in the original meeting.

A century ago, China faced an opium epidemic. According to official statistics, almost one quarter of Chinese men consumed opium in 1906, and around 5 per cent of the total Chinese population was addicted. Today, around the world, the total number of problem drug users is around 25 million - less than 0.5 per cent of humanity. The number of people who use illicit drugs at least once a year has been contained to 5 per cent of the adult population - a much lower prevalence than for alcohol and tobacco. Deaths due to drugs are limited to 200,000 a year: one tenth of those killed by alcohol; and twenty times less than those killed by tobacco.

A century ago, the supply of drugs was out of control. In 1906, more than 40,000 tons of opium was produced, mostly in China and India (compared to less than 8,000 tons in Afghanistan last year). Thanks to international drug control, opium cultivation has been slashed by almost three-quarters: the problem is now concentrated in one country, Afghanistan, which produces 92 per cent of the world's deadliest drug. Coca leaves, which used to be grown in several countries, are now only grown in three Andean countries: Colombia, Peru and Bolivia. "Compared to a century ago, drug demand and supply have been brought under control", said the Executive Director of UNODC, Antonio Maria Costa. "Adherence to the international drug control regime (based on 3 UN treaties) is universal, and the principle of shared responsibility is unanimously accepted". However, Mr. Costa cautioned that "while the world drug problem has been contained, it has not been solved".

At the commemorative event in China, representatives of the countries taking part agreed on a Shanghai Declaration which will be presented at the high-level segment of the upcoming Commission on Narcotic Drugs that will meet in Vienna on 11-12 March.

For more information on a century of international drug control, a copy of the Shanghai Declaration, and the full text of Mr. Costa's speech refer to www.unodc.org.