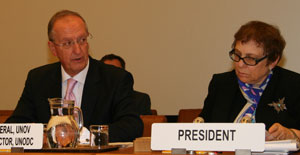 17 October 2008 - The fourth session of the Conference of States Parties (CoP) of the United Nations Convention against Transnational Organized Crime concluded today with decisions on a wide range of issues requiring effective global criminal justice responses. Five years after it came into force, 148 States Parties gathered in Vienna from 8 to 17 October to review implementation of the Convention and consider how to tackle new threats such as environmental crime, identity theft and cyber-crime.

Antonio Maria Costa, Executive Director of the United Nations Office on Drugs and Crime (UNODC), urged representatives to accelerate the process of developing and testing a review mechanism, similar to the one created to monitor compliance with the UN Convention against Corruption. He also urged all Member States to become a Party to the Convention before the next Session in 2010.

The Conference brought greater understanding of countries' capacities and shortcomings in fulfilling the obligations of the landmark Palermo Convention (as it is also known), and its three Protocols (covering Trafficking in Persons, Smuggling of Migrants, and Illicit Manufacturing of and Trafficking in Firearms). Steps were also taken to strengthen international cooperation, for example among central crime-fighting authorities.

The Conference recognized the importance of technical assistance to prevent and fight organized crime.  Mr. Costa assured States that his Office would step up technical cooperation in the fight against human trafficking - that is the highest priority of UN.GIFT, an initiative spearheaded by UNODC. The head of UNODC said that he would like to "provide assistance against the smuggling of migrants and trafficking in firearms as well, but at the moment we lack everything: information, expertise and resources. I hope that the decisions taken here will bring more attention to these issues, and strengthen implementation of these two forgotten Protocols."

In the absence of comprehensive data on crime worldwide, the Conference examined ways to enhance information-gathering as the basis for evidence-based policy-making, intelligence-led investigations, regional and international cooperation, and technical assistance. It also showcased IT systems for intelligence and law enforcement developed by UNODC, and held expert consultations on forensics, trafficking of humans and firearms.

The bottom line is to make the Palermo Convention a living instrument - "to make the CoP relevant to cops," Mr. Costa said.  "The UN Convention is our strongest legal weapon in the fight against organized crime. Let us continue to sharpen it and wield it more effectively to promote security and justice for all".