Fidela, Felix and the chocolate factory 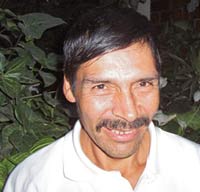 The cooperative, made up of 3,000 farmers, demonstrates that it makes good economic sense for farmers to work together to produce cocoa and coffee for export markets. Israel Pisetsky, general manager of CACVRA, says cooperatives are helping the region to rebuild its economy after Shining Path guerillas and drug traffickers infiltrated the area in the 1980s and 1990s.

"Our cooperative is promoting the ideals of working together to bring investment and democracy to our region. We are helping them to learn new skills to manage their farms in harmony with the environment. Our members also see how working together can translate into better health and education opportunities for their children," says Pisetsky.

Both del Villar and Martinez are former coca growers. They now agree that producing cocoa and coffee is much better for their long-term viability as business people and as breadwinners. Del Villar, a mother of five, says she is proud to be producing cocoa for export: "I remember in the 1980s when we were afraid to do anything. We had no choice but to grow coca leaves because that's all we could sell. It was very difficult for us. The future can only be better."

Martinez, former leader of a regional coca-growers' union, says he appreciates the support he received from UNODC to develop the skills to produce organically certified cocoa and coffee. He recently visited a cooperative in northern Peru as part of an exchange programme promoted by UNODC, where he learned about the business side of farming.

UNODC encourages farmers in coca-growing areas to adhere to fair trade and organically produced standards as they fetch a higher market price for products.