By Carolina Azevedo and Norha Restrepo 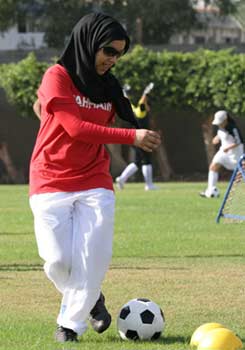 Boys and girls from seven Middle Eastern countries played football together at the first Global Sport Fund (GSF) youth camp held in Jounieh, Lebanon, from 22 to 25 October. Children from Bahrain, Iraq, Lebanon, Oman, Palestine, Qatar and Yemen came together to participate in this unique sporting event that aimed to encourage young people to stay away from drugs and crime.

Despite coming from the same region, the children, aged 12-15, were of diverse backgrounds. Sheikh Saoud Bin Abdulrahman Al-Thani, Secretary-General of the Qatar Olympic Committee (QOC), a GSF co-sponsor, joined the boys and girls on the pitch and listened to them as they talked to him about their love for football. "Sports can do what politics cannot," said Sheik Saoud, "it can bring people together."

"I wish that more people in Iraq would practice some kind of sport. It makes you forget all the troubles. So it's a way to feel better - and to have fun," said Iraqi teenager Ali Mshali.

"Coming from some of the most troubled countries in the world, many of these youngsters have suffered adversity and severe stress," said Antonio Maria Costa, Executive Director of the United Nations Office on Drugs and Crime, QOC partner of the GSF. "Through sports and events like the Global Sport Fund football camp, we can take small steps forward for future generations", Mr. Costa said.

Winning is not the main goal 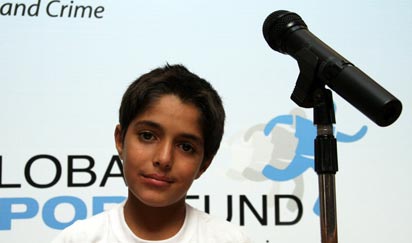 "Through sport, young people can learn a number of positive values, such as loyalty, commitment and respect for others," said Gary Roberts, a sport education expert who led the workshops designed to teach the youngsters about fair play.

During the camp, children focused on improving football skills on the field and learning about fair play both on and off the field. In addition, they heard about how drugs affect people and sports. Illicit drugs, alcohol and doping were discussed.

Salama Anbar, from the Sports Ministry of Bahrain believes that sports and drug abuse prevention should be included in every well-integrated social policy. "In the Gulf countries, there have been a lot of problems with heroin abuse, particularly among vulnerable populations. Sports have to become a part of girls' and boys' lives. This is crucial for building responsible citizens for the future," she said.

On the training side, the football camp gave children a chance to learn, through sports, that it is more important to play than to win. They were encouraged to enjoy the game and not to care too much about the results. As Roberts put it, "winning matters, but it also matters how you win."

The approach worked for 13-year-old Qataralnada Rihan and her team members. She said: "I was glad to know that I don't have to be the best to be valuable for the team. I enjoy sports, it makes me happy to play football and basketball with my friends and brothers at my camp in the West Bank." 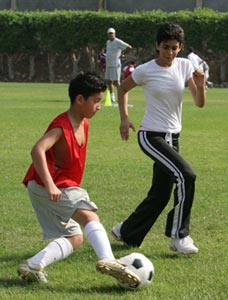 Coaches play an important role in making sure children have fun and learn skills and values in the process. They can teach such values by presenting sports in a positive way and creating a good environment for their team, one that rewards camaraderie and fairness.

At the camp, it was clear that the children looked up to their coaches and appreciated their guidance, but also that the coaches got a lot of satisfaction from their role.

Jihad Mahjoub, a member of the Lebanese National and Olympic teams and football coordinator at the GSF camp, said that the experience of playing and learning with children was not always easy but the outcome was positive. During their stay in Lebanon, relations improved between kids who belong to different sections of society, religious communities and ethnicities. "The experience was also good for the coaches. We got to know each other better and work together in a constructive way," added Mahjoub.