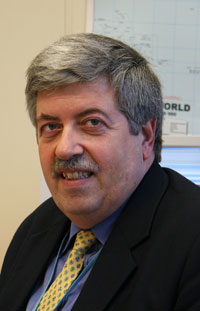 25 January - The Second Conference of the States Parties to the UN Convention against Corruption is about to start in Bali, Indonesia. One of the key topics of discussion is monitoring, or how best to review countries' progress in using the Convention to prevent corruption.

Dimitri Vlassis, Chief of UNODC's Crime Conventions Section, explains that the notion of monitoring is generally difficult to introduce in the context of the United Nations because our work is based on negotiation and mutual understanding. For this reason, the Convention against Corruption stopped short of establishing a structured monitoring mechanism and left it to the Conference of States Parties.

At the first Conference of States Parties in Jordan in December 2006, the participants decided that monitoring is necessary, which Vlassis describes as a "huge step" for international anti-corruption work. The Bali conference will aim to take this further by looking into ways to monitor countries' progress.

"This will be done in the spirit of support rather than criticism, of helping each other rather than finding fault," Vlassis says. Countries should work together to reach the same level of implementation of the Convention, which is a complex and comprehensive legal instrument, to fight and prevent corruption more efficiently.

Although Governments who have ratified the Convention - so-called "States Parties" - are the key participants, the Bali Conference is open to all Governments. A number of ministers will attend, but also other experts such as heads of anti-corruption agencies, law enforcement representatives and parliamentarians.

In addition to monitoring, other priority topics at the Conference are asset recovery and technical assistance, particularly to developing countries.

The Conference is also promoting the notion of shared responsibility; that many sectors of society can help stop corruption. Alongside the intergovernmental, political process, there will be special events for other stakeholders - including artists, NGOs, the private sector and the media - to explore their role in anti-corruption work.