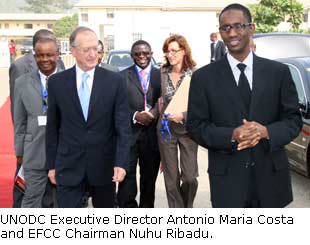 20 November - Nigeria used to be synonymous with corruption just a few years ago. Unscrupulous leaders pilfered the national coffers and stashed away billions of dollars in foreign bank accounts. By some estimates close to US $400 billion was stolen between 1960 and 1999. Sani Abacha alone is estimated to have stolen the equivalent of 2 - 3 per cent of the country's GDP for every year that he was President.

That is a staggering - almost  "astronomical" - amount of money because if you were to put 400 billion dollar bills end-to-end, you could make 75 round trips to the moon!   Concretely, those 400 billion dollars could have translated into millions of vaccinations for children; thousands of kilometres of roads; hundreds of schools, hospitals and water treatment facilities that never came to be.

But Nigeria is fighting back. It has waged a war against inefficiency and endemic corruption and today it is winning. There is nothing short of a "corruption climate change" in the air.The Economic and Financial Crimes Commission (EFCC) led by fearless "crime-buster" Nuhu Ribadu is the most successful anti-corruption agency in Africa and is setting an example to the rest of the world.It is enhancing good governance and financial accountability while helping reduce fraud, waste and corruption.

Nigeria is Africa's biggest oil exporter, but its natural resources make it particularly vulnerable to corruption. The oil-rich Niger Delta is a case in point.Corruption deters much-needed foreign investment, which keeps countries mired in poverty and its people deprived. Huge revenues from oil or gas reserves mean low taxes, but also low accountability and a lack of transparency, as well as limited public services. The EFCC is an initiative that could help reduce vulnerability to corruption, bad governance and poverty caused by greed for lucrative oil wealth and plough that money back where it is needed - in social and economic development programmes.

Last week, at the Nigerian All Judges Conference held in Abuja, UNODC assessed Nigeria's track record over the last seven years in important areas, such as improving the quality of justice, especially for the poor, and strengthening integrity, accountability and independence in the judiciary. It found that Nigeria had taken bold steps to remove corrupt justice officials and staff. Nigeria is making strides in improving citizens' access to justice.

Such efforts are starting to show significant results. In three states that have established pilot programmes, public confidence has increased as bribery and political influence decrease. For example, whereas in 2002, prisoners in remand waited more than 30 months before their trial concluded, in 2007 the wait was down to less than 12 months. In 2002 more than 40% of court users were asked for bribes to expedite their court cases - in 2007 it were less than 10 per cent. And most importantly, while in 2002 more than 40 per cent of court users claimed that they would not use the courts again, in 2007 only 20 per cent shared that view.

Nigeria's anti-graft war is proving that there are no sacred cows left when it comes to tackling corruption. That sends a strong message of hope across the continent and beyond.