Opium cultivation in Afghanistan down by a fifth 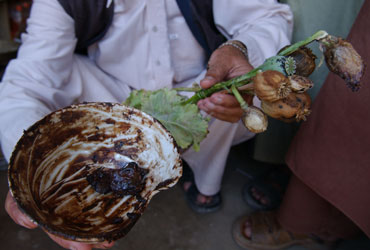 According to the report, the number of opium-free provinces has increased by almost 50 per cent since last year, from 13 to 18. Indeed, 98 per cent of the opium is grown in just seven provinces in the south-west (Hilmand, Kandahar, Uruzgan, Farah, Nimroz, and to a lesser extent Daykundi and Zabul), where there are permanent Taliban settlements and organized crime groups profit from insecurity.

The distinct geographical overlap between regions of opium production and zones of insurgency shows the inextricable link between drugs and conflict.

The report attributes the decrease in cultivation to good local leadership assisted by bad weather.

Strong leadership by some governors has discouraged farmers from planting opium through campaigns against its cultivation, peer pressure, and the promotion of alternative development. The most impressive result is in Nangarhar; from being Afghanistan's second highest opium producing province in 2007, this year, it is opium free.

Drought has contributed to crop failure, particularly in the north and north-west where most of the opium is rain-fed. Bad weather conditions also damaged other crops, like wheat, significantly increasing domestic prices. On the one hand, this, combined with the impact of rising global food prices, is creating a food crisis in Afghanistan. On the other, it has made wheat an attractive, licit alternative to opium. The gross income ratio of opium to wheat (per hectare) in 2007 was 10:1. This year it shrunk to 3:1.

Despite these improvements, the situation is vulnerable to setbacks. "Afghanistan's drug control strategy should be to consolidate and reduce", says Antonio Maria Costa, Executive Director of UNODC. "Afghanistan is one of the poorest countries in the world, and the latest food crisis has made farmers even more vulnerable. Opium is a seasonal plant. It may be gone today, but back again tomorrow," he warns.

To reduce opium even further, the report calls on efforts to make Nimroz, Daykundi and Zabul provinces opium free. Opium productivity and cultivation in these provinces are lower than in the south, and insurgency is less of a threat than in Hilmand, Kandahar or Uruzgan.

With all attention focused on opium, neglect has turned Afghan cannabis into a low risk/high value cash crop. There is no point reducing opium cultivation if farmers will switch to cannabis. The issue needs to be seriously addressed.

For the third year in a row, opium supply far outweighs world demand. Prices are falling, but not dramatically. This suggests that vast amounts of opium, heroin and morphine have been withheld from the market. As a priority, intelligence services need to examine who holds this surplus.

The opium economy will continue to prosper with impunity unless there is a crackdown on corruption. In addition, in line with UN Security Council Resolutions 1735 and 1822, the Afghan government assisted by Member States must bring to justice the most wanted drug traffickers who are bankrolling terrorism and insurgency with drug money.

Efforts to stop the diversion and smuggling of precursor chemicals used in Afghanistan to process heroin must be stepped up. Increased intelligence sharing and joint operations in 2008 have resulted in major seizures of acetic anhydride in Afghanistan, neighbouring countries, and en route to the region. Preventing these chemicals from reaching Afghanistan will make heroin production a much riskier and costlier business.

In Kabul during the report's launch, Mr. Costa congratulated President Karzai on recent positive developments in drug control. He urged the central government to stay the course during the election period, and provide the leadership, security, justice and integrity needed to make further progress against the poppy problem. "Drugs and terrorists should not determine the fate of Afghanistan."

Map of opium cultivation in 2008 in Afghanistan