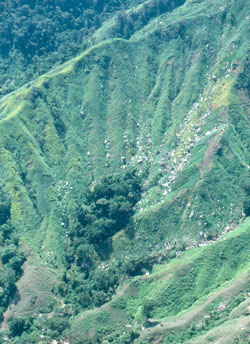 14 April 2008 - UNODC recently co-sponsored an international meeting of experts with the Government of Indonesia on global trafficking in forest products, including timber, wildlife and other forest biological resources. The meeting was held to discuss the economic, social and environmental impact of this crime, associated offences, and the ways and means to prevent them.

Trafficking in forest products, wildlife and forest biological resources is a major problem worldwide. It is of particular concern to developing countries. The United Nations and the World Bank estimate that illegal logging on public land alone causes annual asset and revenue losses of over $10 billion. Around $5 billion alone is lost to evaded taxes and royalties on legal logging.

Beyond the economic impact, forest crimes have profound social and environmental consequences. The livelihoods of close to a billion poor people depend on forests. Any illegal activity impacts them directly, adding to their vulnerability. Such crimes also damage delicately balanced forest ecosystems, as they affect the conservation of forest resources and biodiversity.

Forest crimes are inextricably linked to corruption, the effects of which are widespread. "From the forest to the ports, and also in receiving and transit countries, a series of Government officials across different departments are corrupted," says UNODC crime prevention expert, Ajit Joy, who attended the meeting.

Appropriate law enforcement and forest management measures are needed to tackle the problem. That said, experts at the meeting recognized that not enough is understood or known about its scope and scale. "We have to promote better understanding and enrich our knowledge if we are to reach common approaches," says Joy, "For example, right now there are different interpretations on what constitute legal and illegal acts in the forest sector."

States have passed laws to protect and manage their forests and wildlife, and most have forest authorities, police and sometimes specialized units to enforce them. Yet, their implementation, particularly in developing countries, is often weak, whether due to poor resources, limited capacity and training, poor coordination and information sharing or lack of awareness. Sometimes the very people who ought to protect forest assets are involved in illegal activities.

Even when arrests are made, convictions rarely follow due to weaknesses in the judicial processes, Joy explains. Sanctions do not meet the gravity of the crime and assets confiscated by offenders are rarely returned. Forest crimes are thus a low-risk, high-profit business. The lucrative returns attract organized crime groups involved in other illegal activities. Addressing these gaps in the legal and law enforcement response was one of the experts' major recommendations, including through training, capacity-building and awareness-raising. The legal basis for this work can be provided by the United Nations Convention against Transnational Organized Crime and the United Nations Convention against Corruption, of which UNODC is the custodian.

The cross-border nature of the crime, where raw material in one country ends up as a finished product in another, requires close international cooperation and information exchange between law enforcers and judicial authorities. Experts recommended such cooperation at bilateral, regional and international levels and emphasized the inclusion of civil society, including non-governmental organizations and the private sector, to ensure a comprehensive response.

"Involvement of industry down the line is an important measure," says Joy. "As consumers and demand generators, they must encourage compliance with forest laws as well as adopt codes of conduct refusing the use of illegal forest products for the sake of profit."