Stepping up the fight against corruption 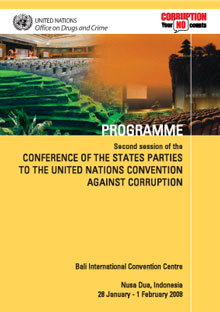 15 January - An important part of UNODC's work is to assist countries in using the international Conventions as efficiently as possible in their work against drugs, crime and terrorism. To this end, countries which have signed or ratified the United Nations Convention against Corruption will meet in Bali, Indonesia, from  28 January to 1 February 2008 to review implementation of the Convention and consider ways to boost international efforts to prevent and fight corruption.

The Convention, which came into force on 14 December 2005, is the first legally binding global anti-corruption instrument. So far, 140 States have signed the Convention and 107 have ratified it to become full-fledged States Parties.

The Second Conference of the States Parties to the United Nations Convention against Corruption will focus on three key issues: reviewing implementation of the Convention, asset recovery, and technical assistance to build national capacity to combat corruption. Other issues on the agenda are possible measures to prevent corruption and improve international cooperation.

The Conference will be opened by Dr. Susilo Bambang Yudhoyono, President of Indonesia, and attended by ministers, policy-makers, experts and representatives of civil society, the media and the private sector. Over 1,000 participants are expected.

A number of special events, listed below, are also planned to engage a broad cross-section of society in the fight against corruption.

30 January: Business Coalition: The UN Convention against Corruption as a New Market Force

30 January: Forum for Parliamentarians: Implementing and Overseeing the UN Convention against Corruption