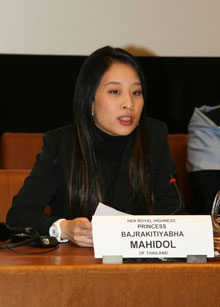 15 April 2008 - "Kamlangjai is a concept very close to my heart; everybody needs it, particularly those in desperation," said Her Royal Highness Princess Bajrakitiyabha Mahidol of Thailand yesterday at the inauguration of her project's photo exhibition at the Vienna International Centre.

Kamlangjai, which means 'inspire' in English, is a project that provides assistance and support to female and pregnant inmates, as well as their children, and fosters their reintegration into society.

The exhibition was organized on the margins of the seventeenth session of the Commission on Crime Prevention and Criminal Justice, whose thematic discussion this year is dedicated to violence against women and ways to eliminate it. Her Royal Highness also presented the project at a side panel discussion today on meeting the needs of women in prison.

'Kamlangjai' was born out of Her Royal Highness's personal interest in human rights, in particular the rehabilitation of offenders. Implemented in various correctional facilities in Thailand, the project offers women prisoners counselling as well as special health, pregnancy and child care normally unavailable in prison. Vocational and employment programmes also equip the women with skills they can use to find work once released. Unskilled women are more vulnerable than men and can relapse into crime.

"Women in prison are a vulnerable group of society that often receives inadequate care from the authorities," said Her Royal Highness in her opening speech to the panel discussion. "The quality of justice has nothing to do with imprisoning, but has everything to do with making offenders a better and more responsible people."

Women form a very small proportion of the overall global prison population. Yet, studies show that their numbers are increasing, and in some areas, faster than those of men. Even so, this change in composition is not accompanied by increased attention to meeting special needs of women inmates. "If anything, it has highlighted the shortcomings of almost all prison systems in meeting gender specific needs," stated Tomris Atabay of UNODC, also speaking at the panel discussion.

The need to address this shortcoming has acquired increasing importance and urgency. Presenting the forthcoming UNODC Handbook on women in prison, Atabay explained the tool was developed to help all actors involved in the criminal justice system formulate gender sensitive approaches to prison management.