This day in history: signature of the Convention on Psychotropic Substances of 1971 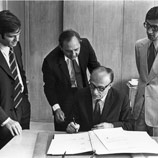 21 February 2009 - On 21 February 1971, 38 years ago last Saturday, the Convention on Psychotropic Substances was signed in Vienna at a conference attended by representatives of 71 States, as well as of the World Health Organization, the International Criminal Police Organization (INTERPOL) and a number of pharmaceutical companies.

States were prompted into signing the 1971 Convention by the rise in methamphetamine abuse, which grew from being a regional problem after World War II to becoming a global phenomenon by the 1960s. However, the negotiations were difficult because drug-producing States were some of the most powerful in the world and their pharmaceutical companies wanted to keep controls to a minimum. The cause was championed particularly by Scandinavian countries and the Soviet bloc; the resulting compromise was a major step ahead for international drug control, placing under international control for the first time a number of amphetamine-type stimulants, hallucinogens (including LSD), sedative hypnotics and anxiolytics (such as barbiturates), analgesics and antidepressants. A significant number of substances were added in the subsequent decades.

The 1971 Convention consists of 33 articles and is largely based on the Single Convention on Narcotic Drugs of 1961, which codified, streamlined and extended international narcotic drug controls. The 1971 Convention regulates the manufacture and distribution of psychotropic drugs, including by placing limits on their sale and advertisement, and includes the requirement to maintain a system of inspection and measures to fight traffic in controlled substances. It also requires States to take measures for the prevention and treatment of abuse, and rehabilitation of persons involved.

Four Schedules were established for psychotropic drugs, with specific controls applying to each based on the potential therapeutic value and the potential risks of a substance. Schedule I, which is the most restrictive, lists those substances that are prohibited except for scientific and very limited medicinal purposes, such as Ecstasy, while Schedule IV inlcudes substances, such as diazepam, which are much less strictly controlled.