Launch of global report on trafficking in persons 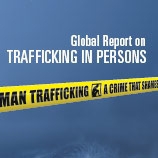 11 February 2009 - One year on from the Vienna Forum to Fight Human Trafficking, UN.GIFT will launch a "Global Report on Trafficking in Persons".  The report is the result of a major data collection exercise carried out during 2007 and 2008.  A first of its kind, the report reflects the state of the world's response to human trafficking containing information from 155 countries and territories. It offers an unprecedented view of the scope of human trafficking and what is being done to fight it, including global trafficking patterns and the legal steps taken in response.

The press briefing of the launch will be webcast live from New York at 12:00.(EST) To view please click: http://www.un.org/webcast/pressbriefing.htm