UNODC anticipates another large opium crop in Afghanistan in 2008 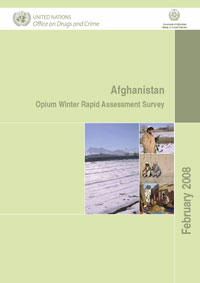 6 February 2008 - The opium poppy seedlings are still under the ground or snow in most parts of Afghanistan, but the UNODC Opium Winter Rapid Assessment Survey, released today, broadly anticipates what can be expected when they bloom this spring.

One of the main findings of the Survey is that cultivation levels will be broadly similar to, perhaps slightly lower than, last year's record harvest. This has been established through field visits and interviews with village leaders.

"Opium cultivation in Afghanistan may have peaked, but the 2008 amount will still be shockingly high", said UNODC Executive Director Antonio Maria Costa at the launch of the report. "Afghan drugs, and the funds they generate, are a destabilizing force. Europe, Russia and the countries along the Afghan heroin routes, should brace themselves again for major health and security consequences", he warned.

The expected 2008 opium trends deepen a dichotomy already evident last year. The possibly growing number of opium-free provinces in the north-east of the country collides against the evidence of likely higher levels of opium cultivation in the south-west - the areas of insurgency and greatest instability.

Another disturbing trend is the steady rise in cannabis cultivation. The report shows that, in addition to supplying 90% of world opium, Afghanistan has become the world's biggest supplier of cannabis, with cultivation estimated at 70,000 hectares this year. It is exported mostly through the southern borders, Pakistan and Iran, and eventually into the Gulf countries.

Full text of the report (pdf).

Press release on the launch of the report.