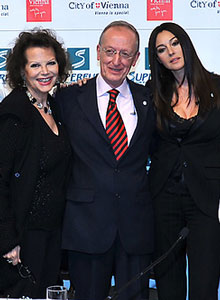 5 March 2008 - Today at the Women's World Awards in Vienna, UNODC Executive Director Antonio Maria Costa launched the Blue Heart Campaign with actors Claudia Cardinale and Monica Bellucci to rally world public opinion against human trafficking. Other stars in attendance included the actor Christopher Lee and singer/songwriter Marianne Faithfull. This crime strips people of their rights, ruins their dreams, and robs them of their dignity. It is a global problem and no country is immune. Millions of victims are exploited every year through this modern form of slavery. 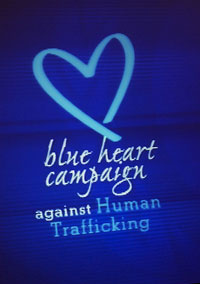 By wearing the Blue Heart, everyone can raise awareness of this crime and join the campaign to fight it. The Blue Heart represents the sadness of those who are trafficked while reminding us of the cold-heartedness of those who buy and sell fellow human beings. The use of the blue UN colour also demonstrates the commitment of the United Nations to combating this crime against human dignity.

To take advantage of social networking, the campaign is encouraging members of the public to change their Facebook profile picture to a blue heart, upload the Blue Heart to their web page, spread the word through Twitter and watch videos about human trafficking on YouTube.

Recalling the United Nations Secretary-General's campaign "Unite to end violence against women", and looking ahead to International Women's Day on 8 March, UNODC Executive Director Costa called on people all over the world to join the Blue Heart Campaign against human trafficking "in order to end enslavement, and achieve women's equality".