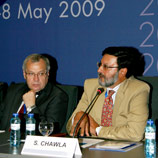 8 May 2009  - The illicit drug markets, by their very nature, have always represented a hidden phenomenon. Unlike other markets, production, consumption, distribution and sale are obscured from view by a variety of techniques - mainly mastered by transnational organized criminal groups in an attempt to evade the net of law and policy that has been woven by the international community over the course of the last century. This obscurity enables transnational organized criminal groups to profit from vulnerable populations, exploit resource poor environments and, perhaps even more importantly, hides from educators, doctors, social welfare and public health care officials those in need of their services.

This week, as part of the ongoing effort to improve the empirical basis for policy, experts from around the world are meeting at the European Monitoring Centre for Drugs and Drug Addiction (EMCDDA) in Lisbon to discuss "Identifying Europe's Information Needs for Effective Drug Policy." Sandeep Chawla, Director of the UNODC Division for Policy Analysis and Public Affairs reviewed how drug-related data is collected at the international level and suggested ways and means of improving the collection and analysis of this data.

The United Nations has collected data on drug production and consumption almost since its inception. The bedrock of the present system is an annual questionnaire that is returned to UNODC by all States parties to the international drug conventions. The information in this questionnaire is then checked, validated and aggregated into international estimates of illicit drug production, trafficking and consumption, and published annually in the World Drug Report. It is used by the international community for both global and national level policy development and programming.

Unfortunately, many States lack the resources and capacity to respond comprehensively to the questionnaires. Because of this, drug use trends are not as perfectly understood as policy makers and programme developers would like. Many years since their development, the United Nation's annual questionnaires are challenged by poor response rates, gaps in information provided and political sensitivities. Improving this is a task that merits a consistent international effort, both for well-targeted policy and, in the case of countries lacking capacity, for well-targeted and needs-based technical assistance programming.