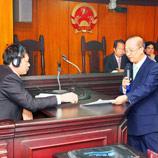 12 May 2009 - UNODC together with the Ministry of Public Security, the Supreme People's Prosecution Office and the Supreme People's Court of Viet Nam recently conducted the first mock trial on money-laundering in that country. The trial was attended by over 50 representatives from courts and prosecution offices in Hanoi and various provinces.

During the mock trial, three judges and a state prosecutor from the Philippines were invited to demonstrate how to prosecute money launderers in their jurisdiction. The demonstration covered pretrial preparation, anticipation of arguments used by the defence counsel or the accused, presentation of evidence as well as the fairness of a hearing.

Following the discussion, participants were given the opportunity to conduct a mock trial using case materials from past hearings in Viet Nam to try money launderers under the relevant articles of the State's Penal Code. For the participants, this was their first hands-on experience in a trial for money-laundering offences. The mock trial enabled them to determine what offences could be prosecuted under the current legal framework and, at the same time, identify gaps in the existing legal provisions.

This mock trial is part of a three-year project against money-laundering through which UNODC aims to assist Viet Nam in increasing the detection, investigation, prosecution and trial capacities of its law enforcement and judicial authorities in relation to money-laundering.

Further technical assistance under this project includes financial investigation training, a train-the-local-trainers programme, a review of the legal framework against international standards, typology development, research on the vulnerability of Viet Nam to money-laundering and development of national action plans against money-laundering. Various training manuals and handbooks have already been produced.

Being a high-cash economy with limited financial and economic control systems, Viet Nam is an attractive destination for money launderers. The International Monetary Fund estimates that up to 1 per cent of the national gross domestic product, in excess of US$ 2.25 billion, is laundered annually.