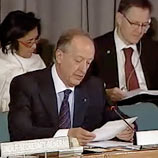 Over the last few years, the General Assembly has placed high emphasis on the issue of trafficking in persons and significant efforts have been made in establishing legal and institutional mechanisms to address this crime. Major progress has been made since the United Nations Protocol to Prevent, Suppress and Punish Trafficking in Persons entered into force in 2003, but many countries still lack anti-trafficking laws.

Human trafficking will also be on the agenda of the noon briefing. A press conference, moderated by Mr. Paul Hoeffel from the Office of the President of the General Assembly, will include Mr. Costa, H.E. Mr. Nestor Arbito Chica, Minister of Justice and Human Rights of Ecuador and Dr. Saisuree Chutikul, member of the United Nations Committee on the Elimination of Discrimination against Women.

Global report on trafficking in persons