UNODC across the world

On 2 December, UNODC and its partners, side by the side with Government leaders, multilateral organisations, the private sector, representatives of the world of sport, civil society organisation, including organisations of People Living with HIV and individual citizens will participate in "The Great AIDS Walk". This original hike on the Mutianyu section of the Great Wall represents a great occasion for all to show their commitment in taking the lead in the HIV response.

On this day, UNODC and many other organisations will also have information booths. UNODC will be displaying information about its work in the field.

The UNODC Egypt office has organized a one-day youth camp to empower 500 young girls and give them the necessary tools and information about HIV transmission, prevention, testing and counselling, stigma and discrimination. There will be a march before the camp, and afterwards, a live concert. Celebrities GWA Khaled ABol Naga and Amr Waked will join the group in the march and during the activities at the camp.

Nairobi - UNODC, in partnership with the National AIDS Commission, the Kenya Probation Service and youth civil society organisations, will hold a testing day for probationers and probation staff, and support their participation to a public rally.

Mombasa - A live radio broadcasting event at the Shimo La Tewa Prison will address counselling and testing of prison staff and prisoners. The radio show will include interviews with prison staff, prisoners, non-governmental organisations and UNODC. Interviews will be accompanied by songs, poems and sports activities for and by the prisoners.

Pakistan - Getting everyone involved!

In addition, UNODC has organised several mass media activities. During the entire World AIDS Day, private television channels will show HIV prevention messages along with a panel discussion. A special programme on a national radio station has also been organised to address HIV-related issues.

On the occasion of the visit of Professor Lars Kallings, Special Envoy of the UN Secretary-General for HIV/AIDS in Eastern Europe, an evening event will take place at the Lesi Ukrainki Theatre. In recognition of their leadership in the AIDS response, national AIDS "champions" will be presented with awards and certificates for their contributions.

The evening will be attended by a number of high-level guests, such as the First Lady, the Vice Prime Minister and other senior government officials. Presentations will be made by former UNAIDS Goodwill Ambassadors Lilia Podkopaeva and Ruslana, people living with HIV, civil society representatives, government leaders and Ambassadors.

Brazil - Partnering up for youth!

In partnership with UNESCO, UNICEF and UNFPA, a national campaign on HIV prevention in schools will be organised. A national poster competition is organised and awards will be presented at an official ceremony in Brasilia on 30 November.

Also, UNODC supports the main media events organised by the National STD/AIDS Programme of the Ministry of Health developed in partnership with the "pastoral da AIDS". This Catholic Church network will hold an ecumenical event and place a red ribbon on the Christ Redeemer (Cristo Redentor) statue in Rio de Janeiro on 1 December.

Nepal - Using the mass media to deliver the message!

UNODC, with the generous contribution of the national television channel "Recovery Nepal" who provided filming and production crews, has organised the creation of a television spot featuring the topic of HIV, injecting drug use and leadership. The message will be aired three times a day.

The UNODC Project Office for the Baltic States, in co-operation with WHO and the Latvian Ministry of Health, has organised the conference "HIV/AIDS in Latvia - future challenges and solutions", to be held in Riga on 30 November. The Minister of Health will open the conference and policy-makers, public health experts and civil society organisations representatives will participate.

UNODC in collaboration with the national authorities and the International Red Cross Committee, has jointly organised several HIV prevention activities in prison settings to commemorate World AIDS Day. Activities will include the screening of HIV prevention video clips, musical and theatrical performances, and information leaflets distribution.   The artwork for the leaflet will be designed by prisoners and will reflect HIV-related themes. Approximately 2000 prisoners will participate in these activities. 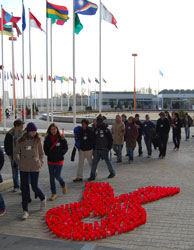 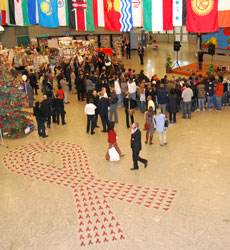 Pictures from the 2007 World AIDS Day commemoration at UNODC headquarters in Vienna.